Known locally as NOLA or by a wider audience as the Big Easy, New Orleans is probably best known for its musical heritage, most notably jazz. It is considered to be the birthplace of what has come to be known as traditional or dixieland jazz.

Wandering the streets of the French Quarter, jazz music seems to be alive and well alongside the blues and even DIY percussion 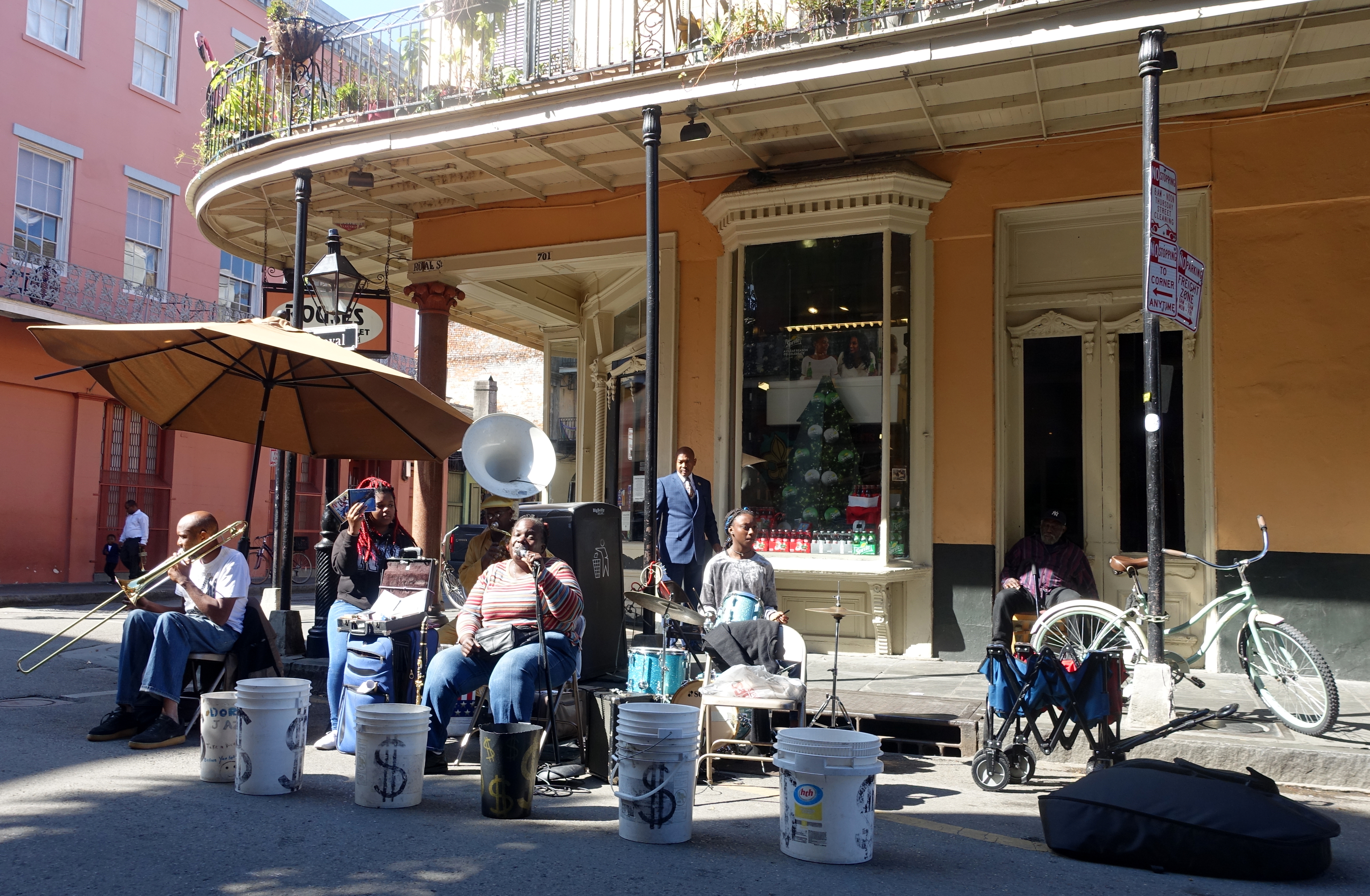 Nearby in Treme is the Louis Armstrong Park, named after the most famous of the city’s jazz musicians, but which also includes the Mahalia Jackson Theatre. Like Armstrong the great gospel singer was born in New Orleans

Just across the road from the park is the site of the old J & M recording studio which many see as the birthplace of rock n roll. It is now a laundrette –  a cool place to wash your clothes. 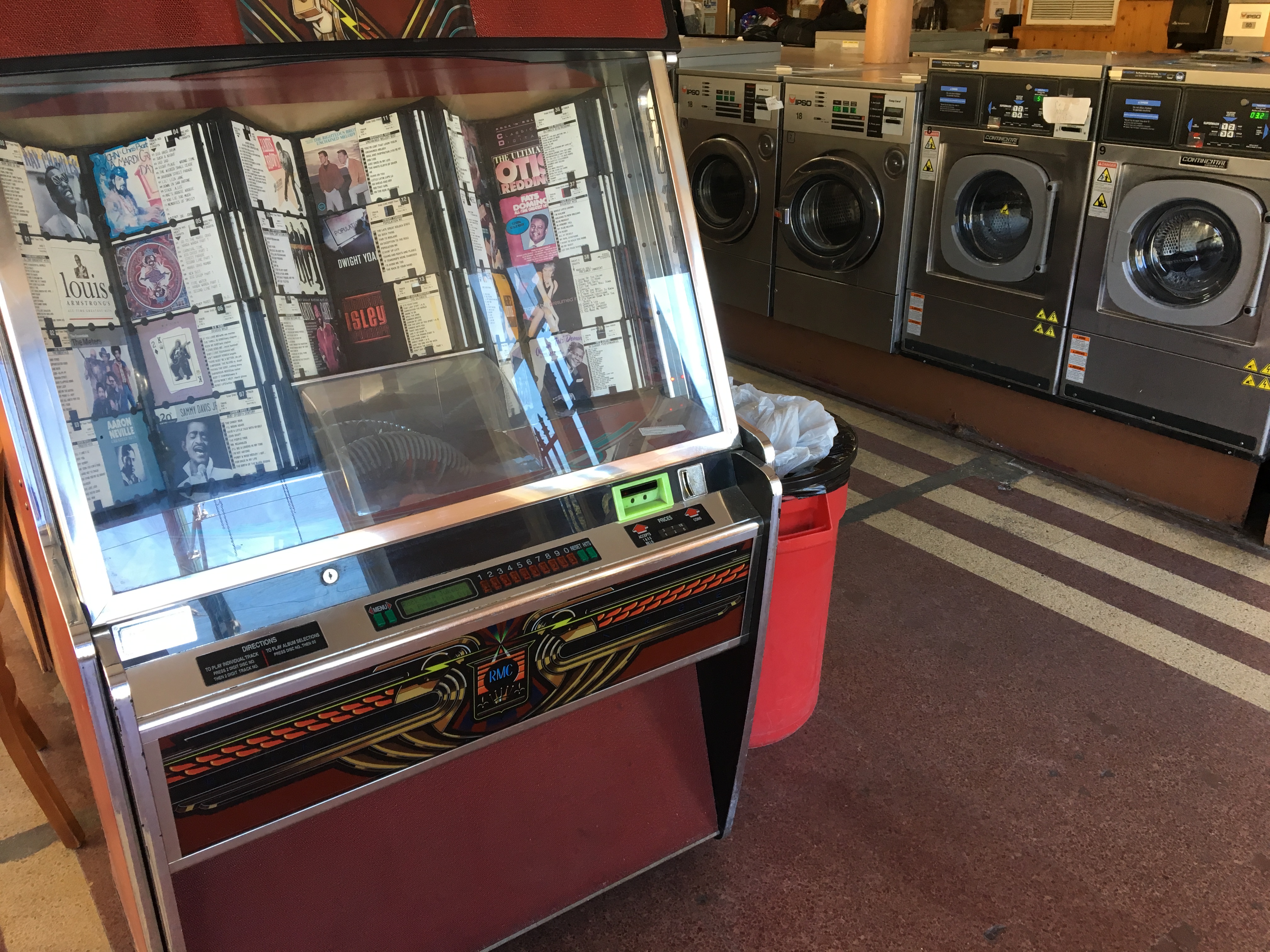 The best live jazz and blues music in New Orleans can be found in Frenchman Street at the end of which lies the New Orleans Music Factory, an impressive music store 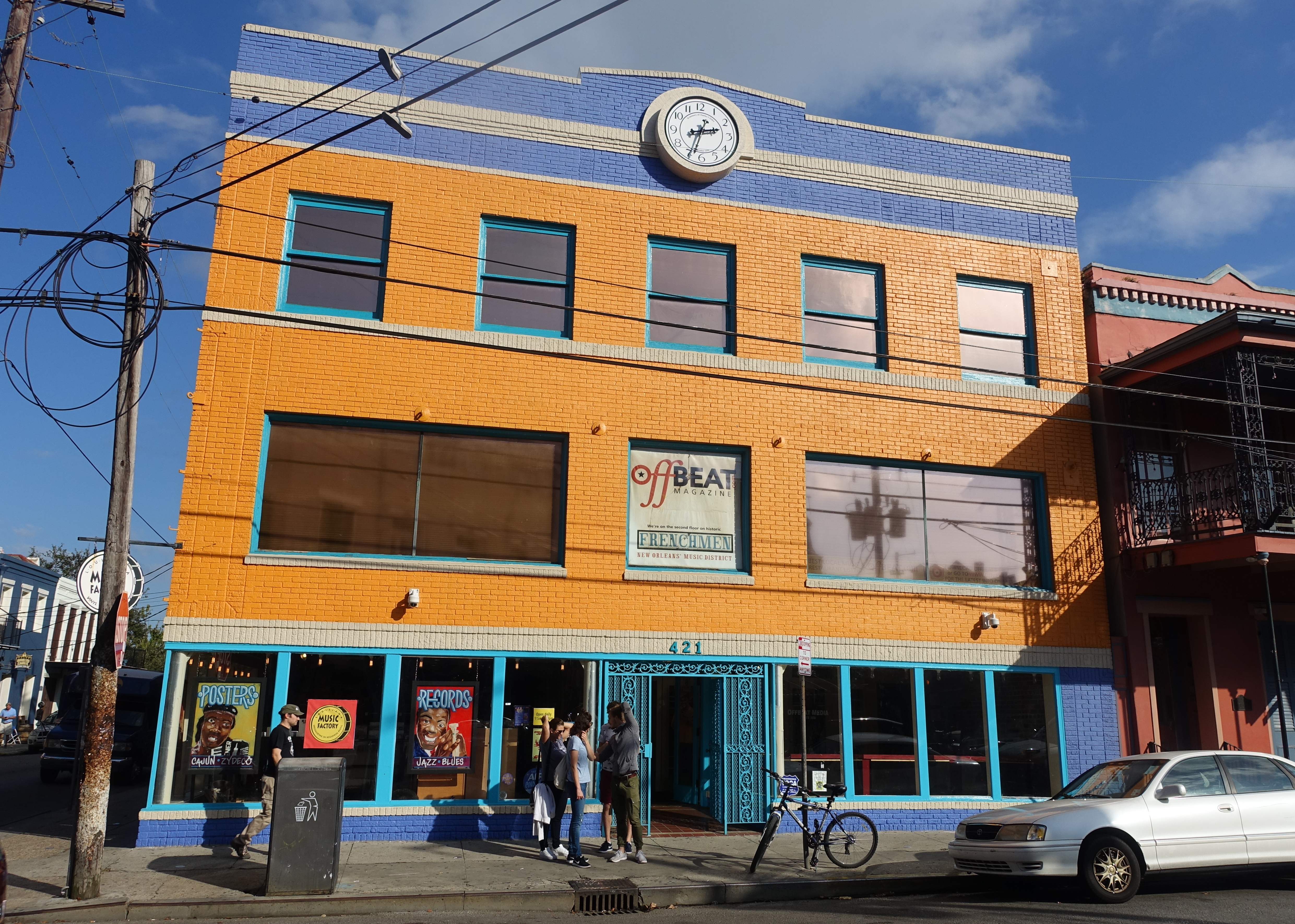 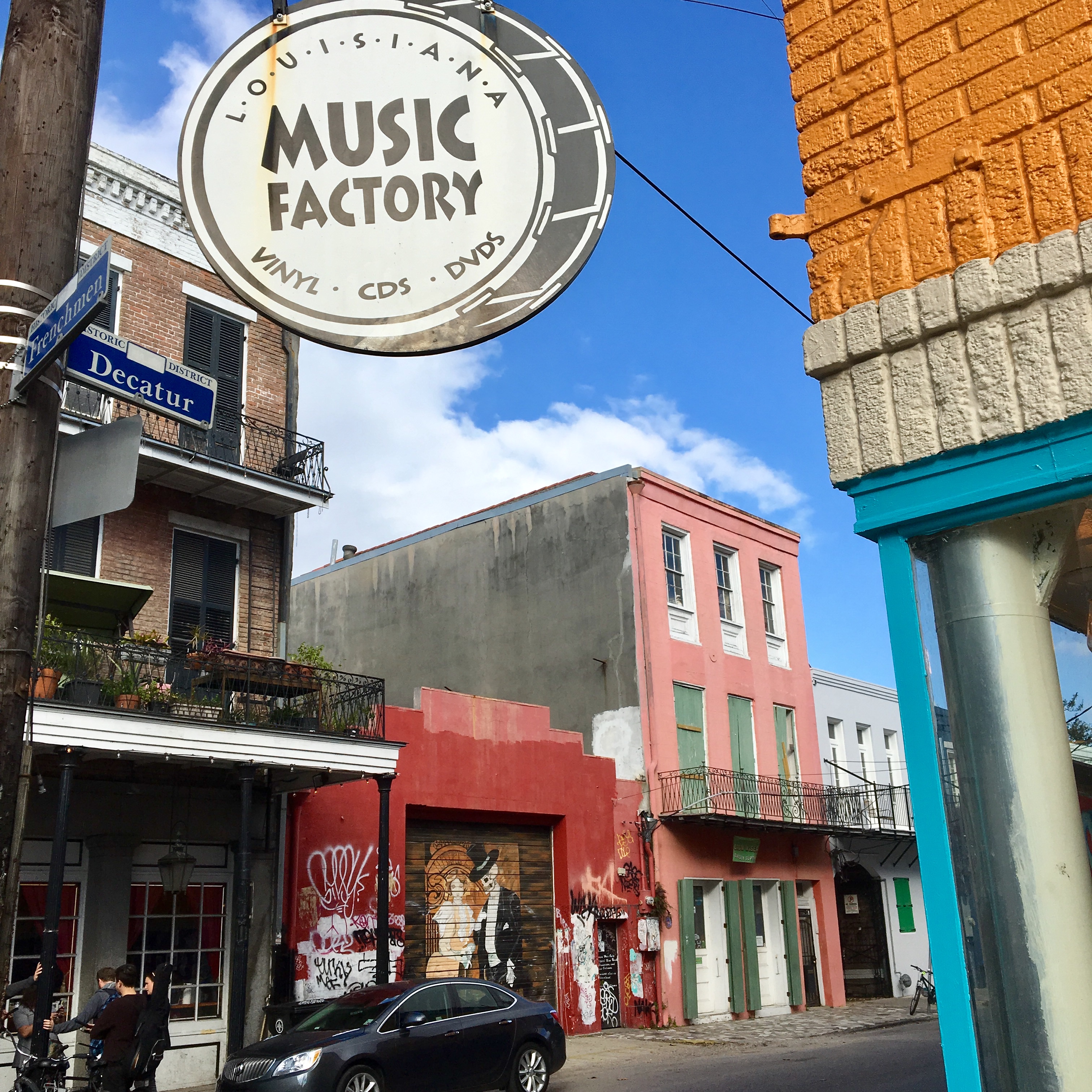 The most famous district of New Orleans is the historical French Quarter to which tourists flock in their thousands. Whilst little remains from the original architecture of the French colonial period of the 18th century, there is is still a distinctive architectural style which can be summed up as creole plus greek revival – complete with iron balconies. 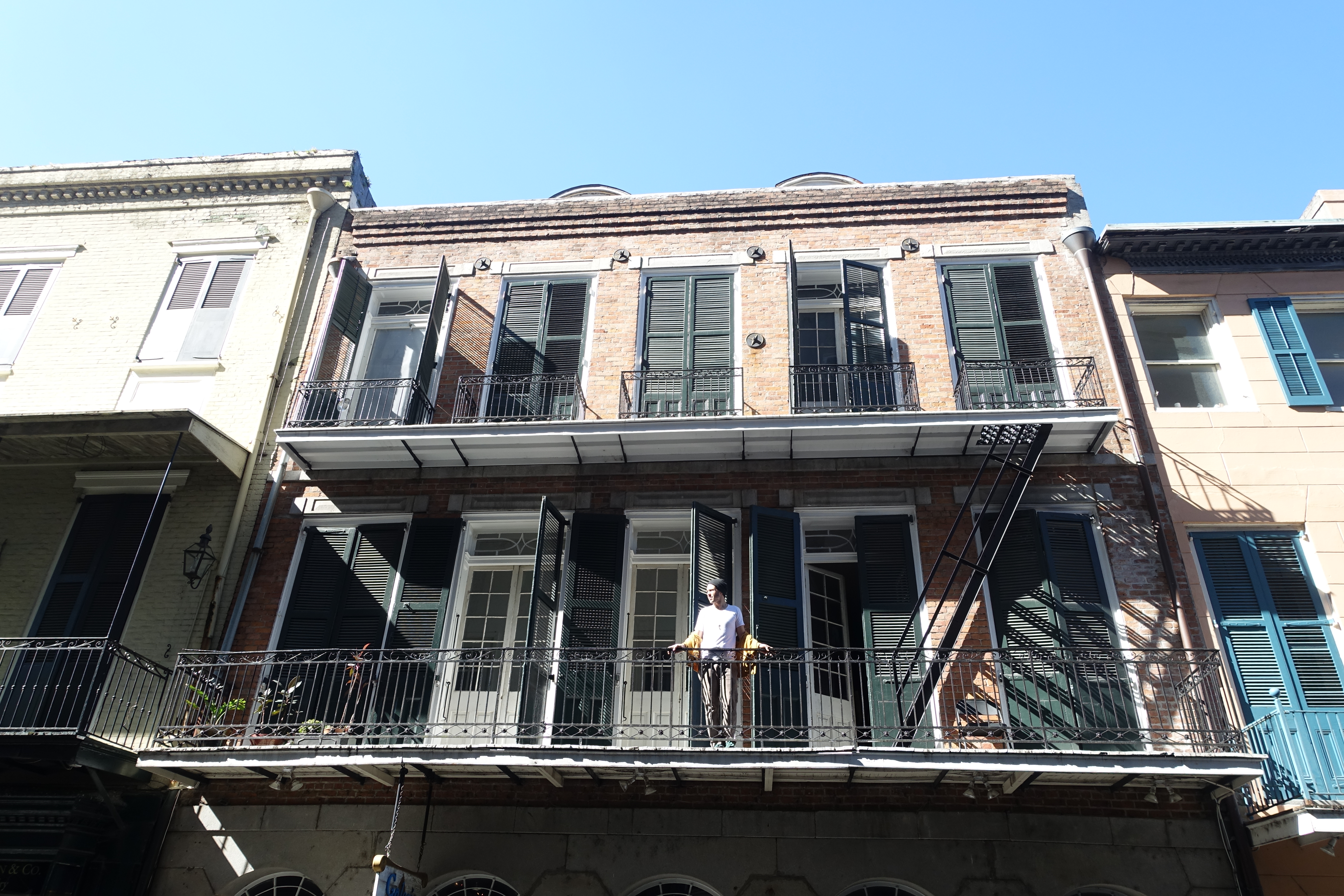 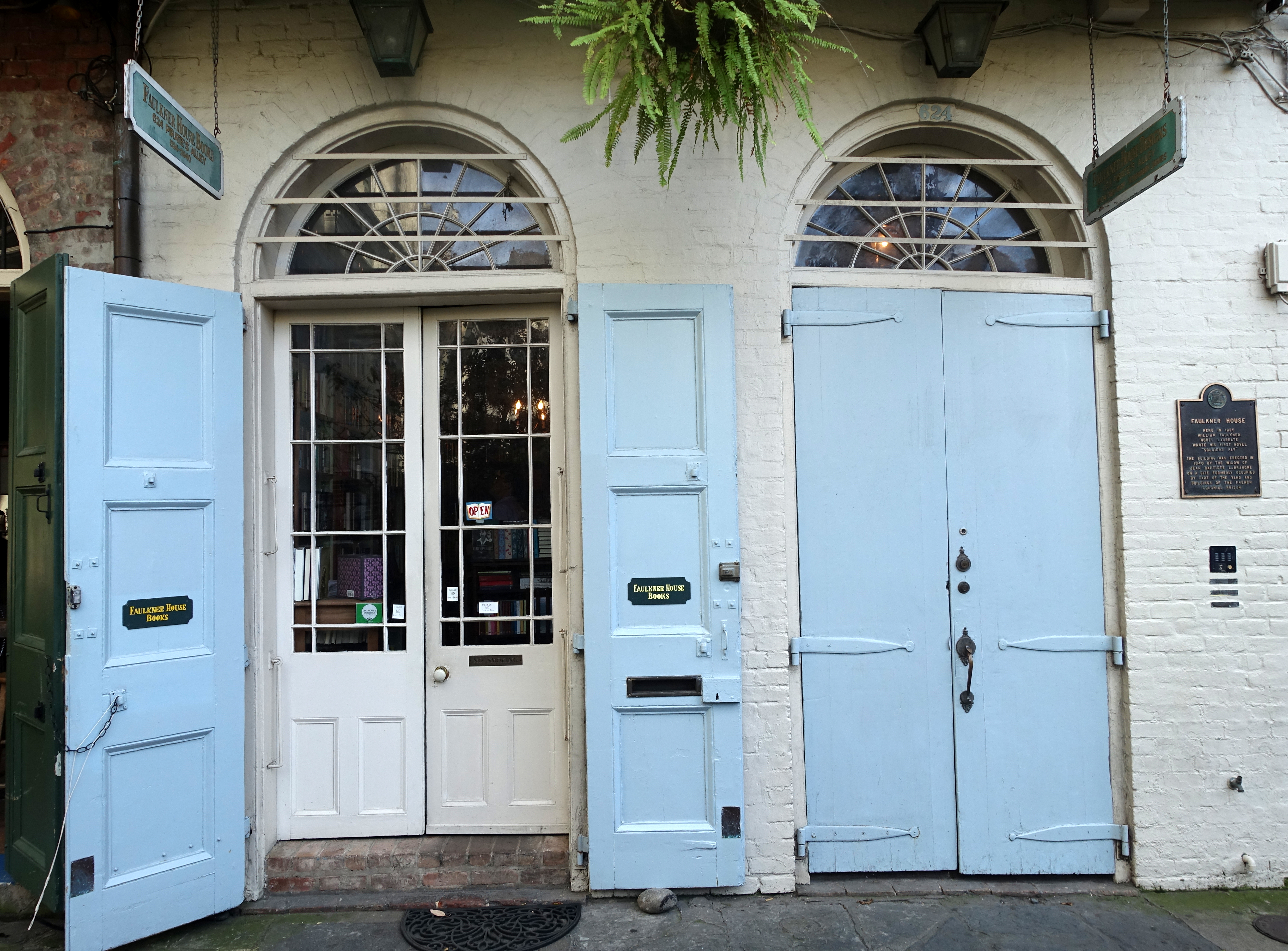 Despite the mainly easy going atmosphere of the local streets, we happened upon the aftermath of two separate car accidents in the space of an hour – much to the bemusement of the locals. 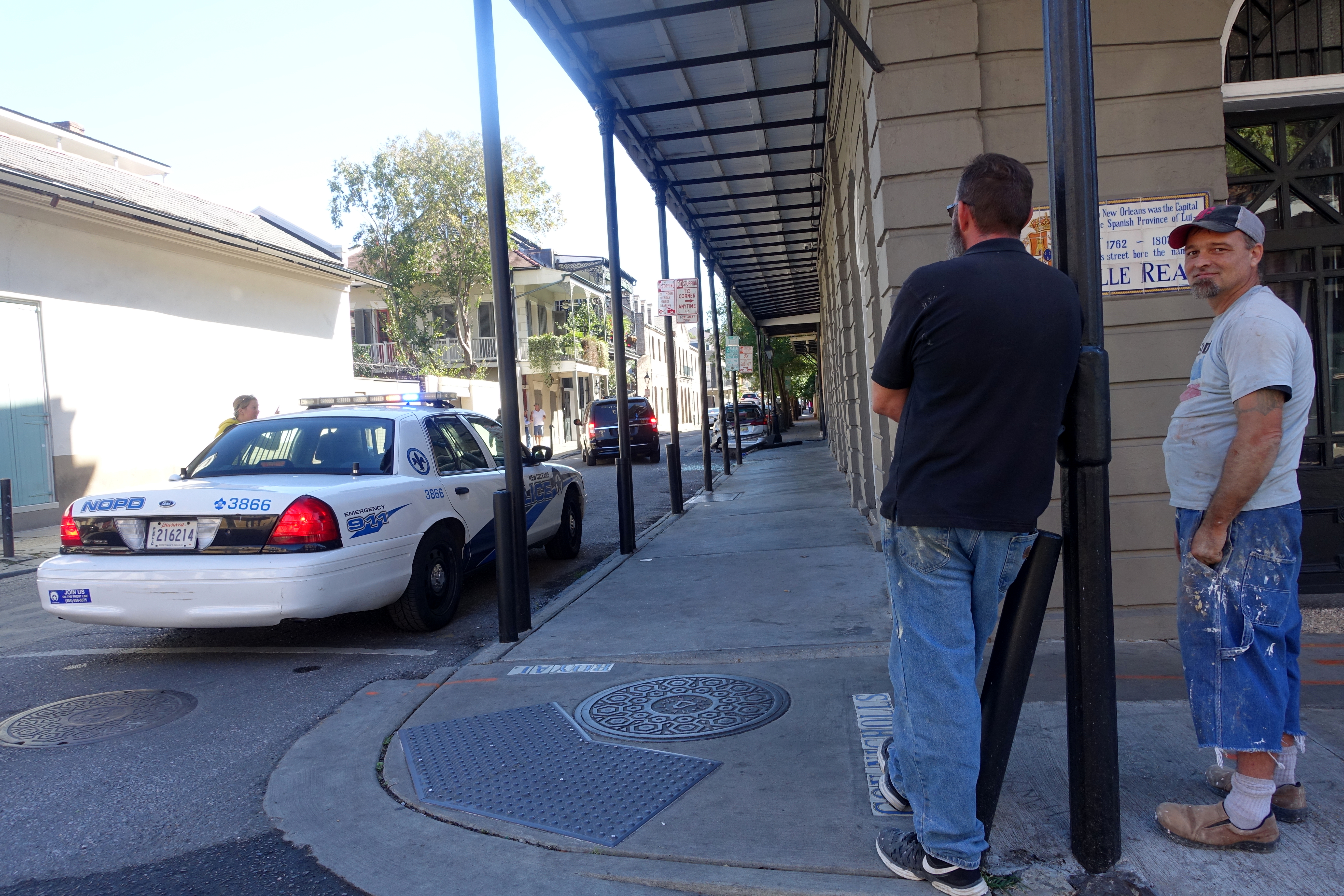 Bordering on the French Quarter is Canal St. Among its buildings  is the magnificent Saeger Theatre which opened in 1927. At the time of its construction it cost $2.5 million and seated over 4000 people. It recently re-opened after being extensively damaged by Hurricane Katrina. 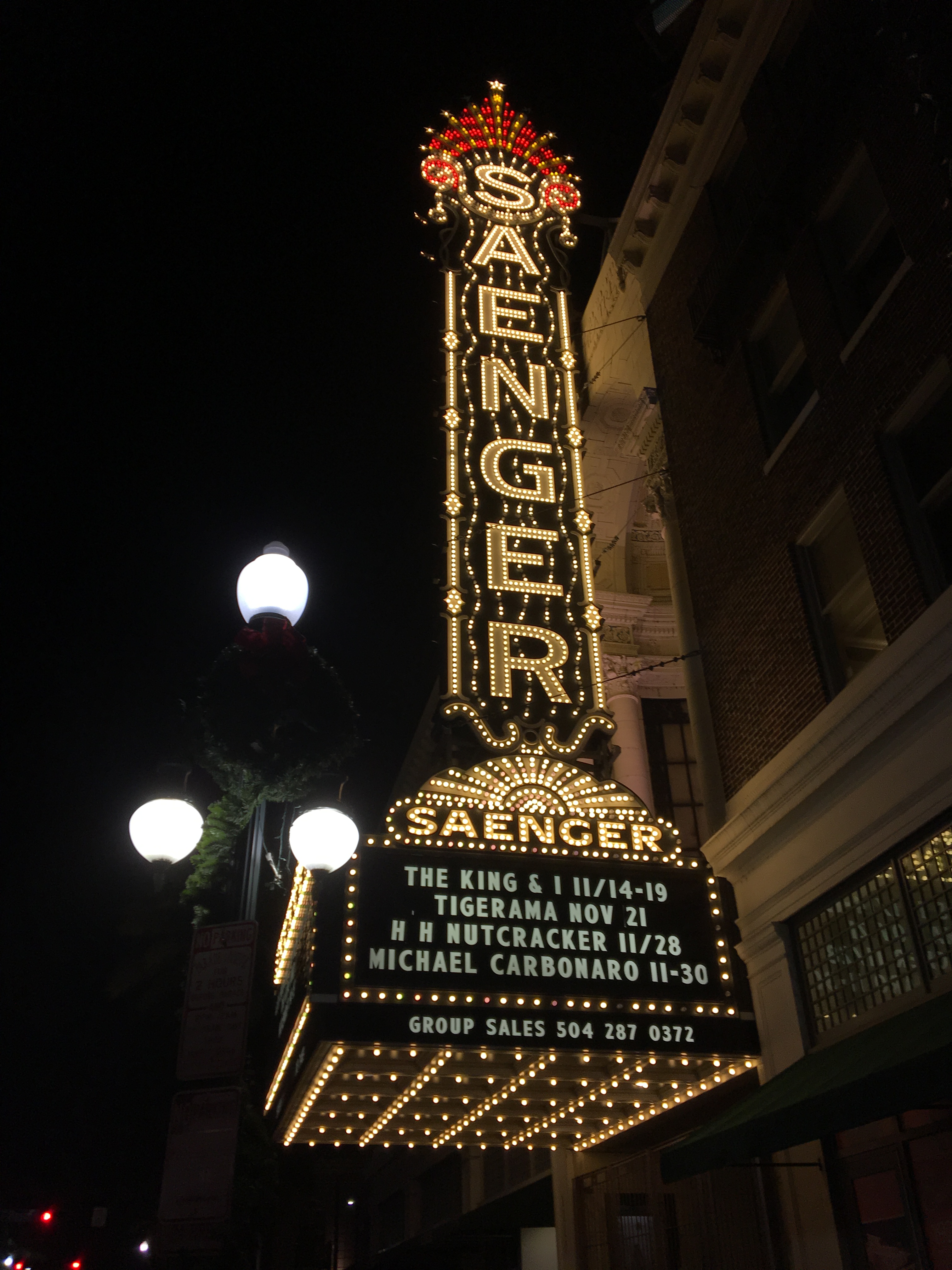 The history of new Orleans is long and complex but suffice to say that colonialism and slavery are at the heart of it.

Staying in the Garden District with its miles of leafy 19th century mansions, it is hard not to contrast it with other parts of the city where poverty is all too apparent. The few black faces we came across in the area only seemed to reinforce traditional racial roles – with a maid acting as nanny to white children, a man passed by with his bicycle…. 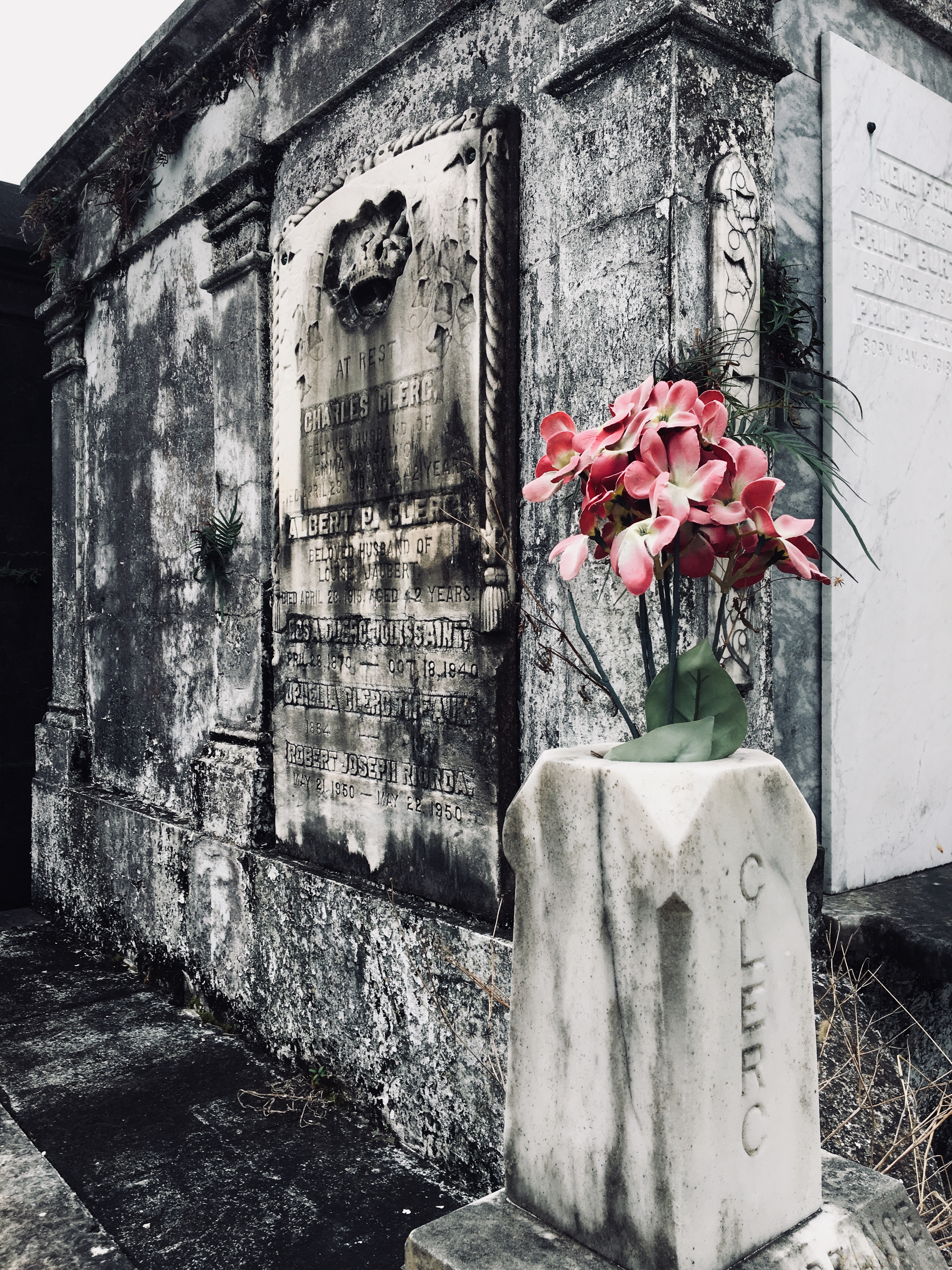 Two notable historic traditions of New Orleans are Mardi Gras and voodoo. Mardi Gras celebrations on Shrove Tuesday, which date from the 18th century, are evident all year round via the beads strung up in trees whch seemingly never get removed 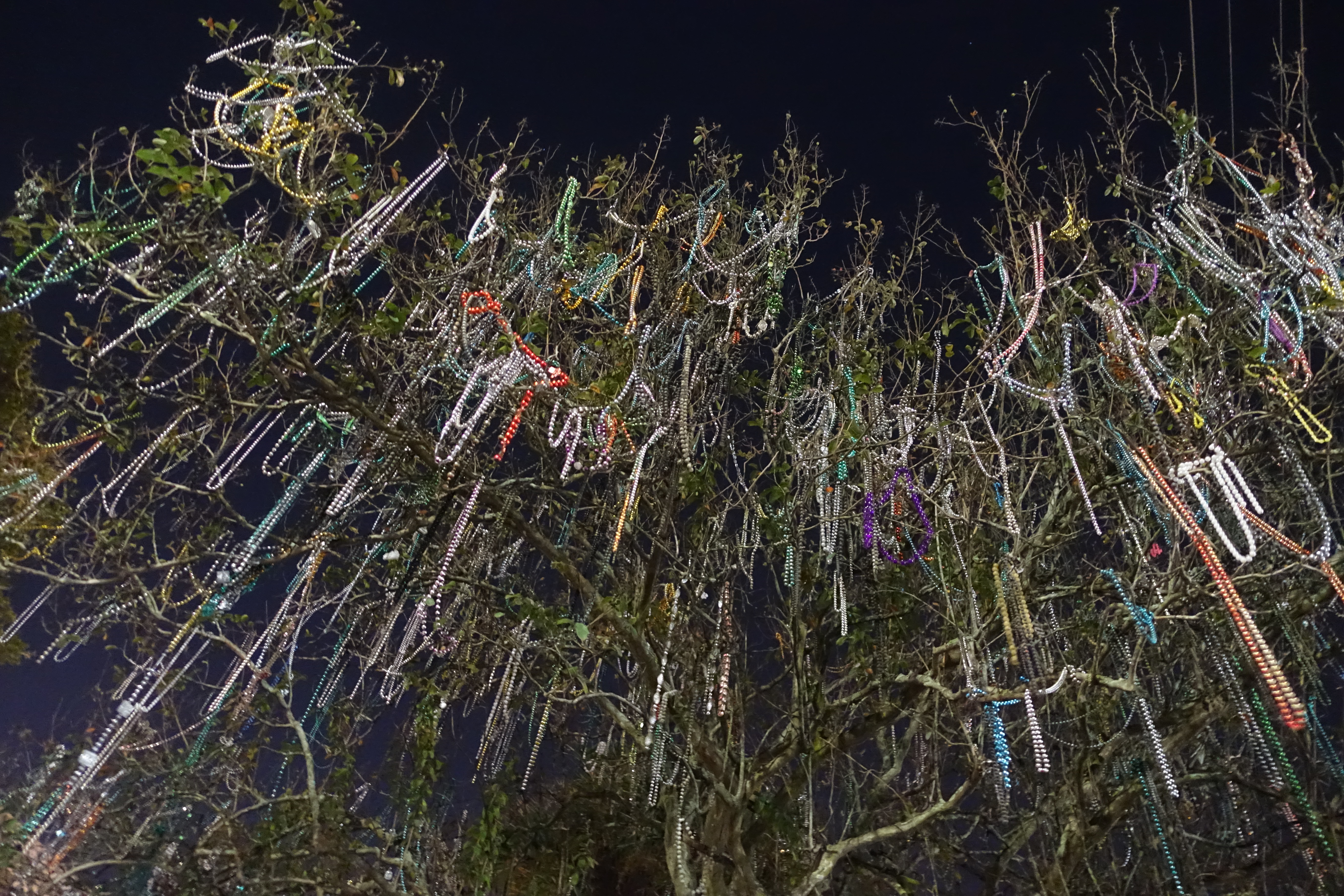 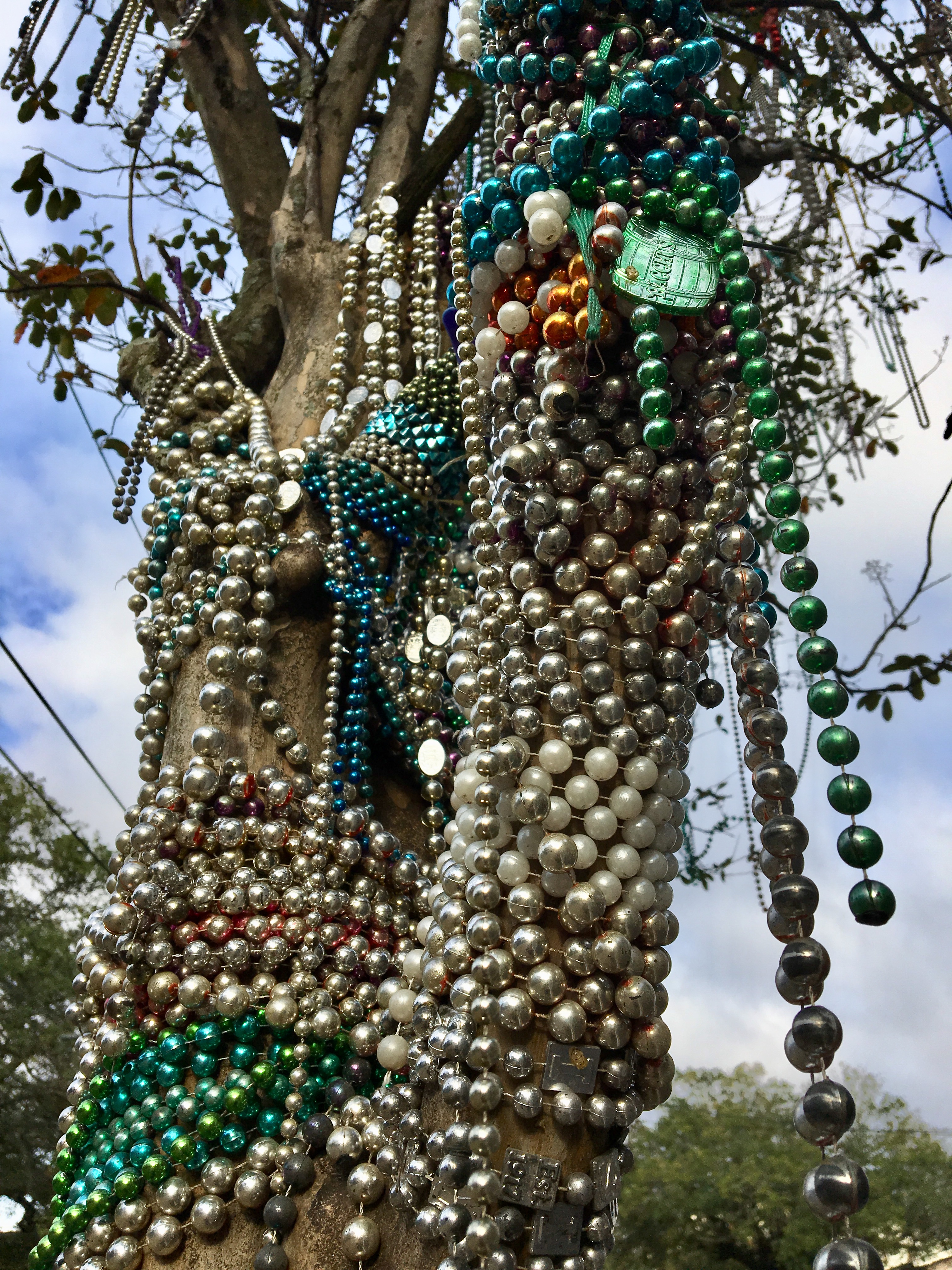 Meanwhile, Voodoo  has its roots in Afro-American religion, but has now become heavily commercialised for the tourist trade

Despite the rather poor local public transport infrastructure (a car is essential for many journeys in the city), New Orleans boasts the oldest tram (or streetcar system) in America – the Charles St line which has run continuously since 1835. The current trams date from the 1920s and operate round the clock, if a little unreliably at times. More recently, the tram system has been partially restored after decades of closure (including the famous Desire destination of Tennessee Williams fame)

The Desire line closed in 1948

New Orleans is renowned for its distinctive cuisine – a fusion of creole, cajun and soul food. Seafood is to the fore, especially oysters, which are served up in multifarious ways at amazingly low prices (compared to Europe) 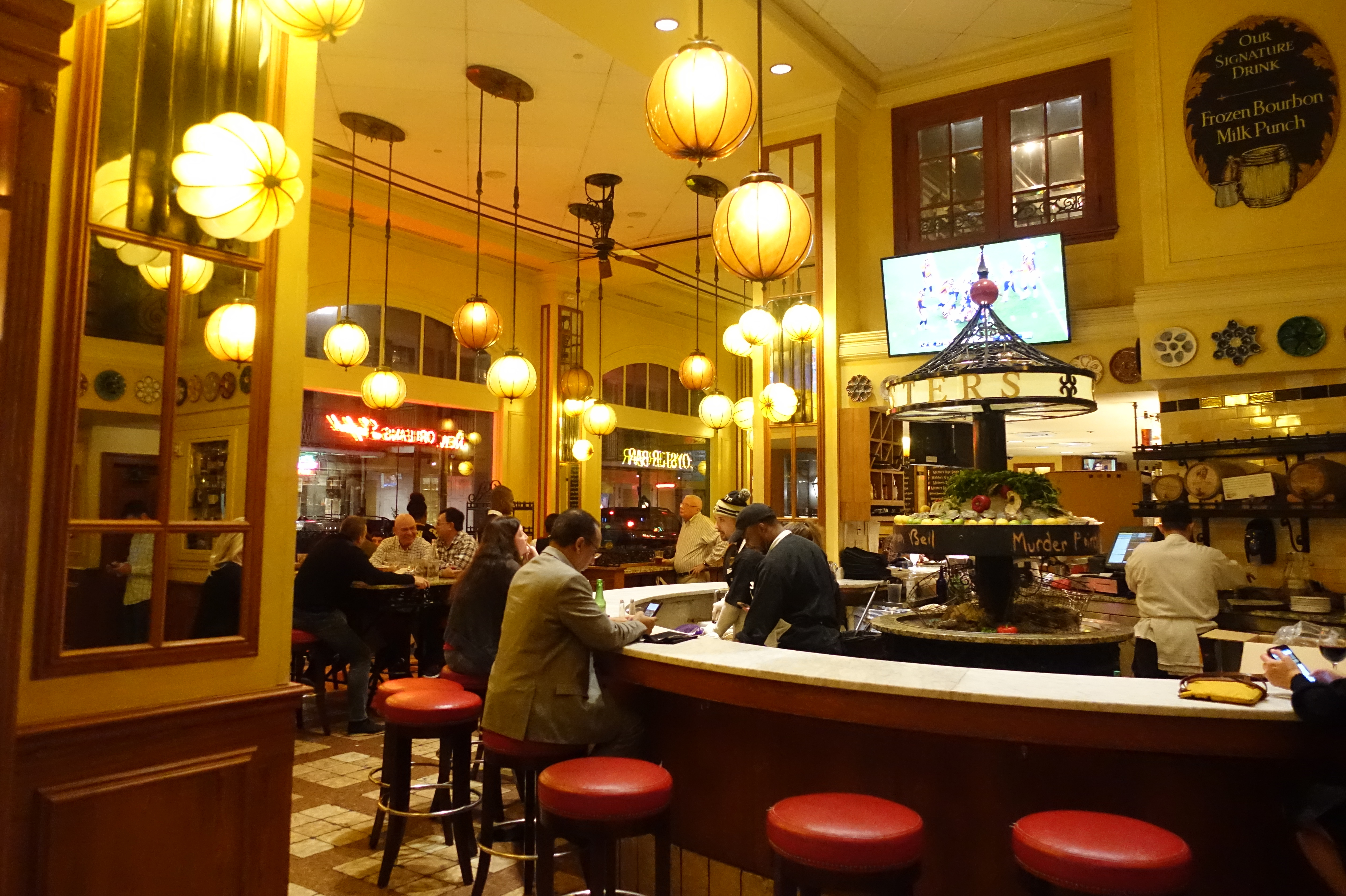 The above picture features the Bourbon House restaurant which specialises in oysters and bourbon whisky. It is also home to the New Orleans Bourbon Society (aka as NOBS)

A prominent local food company is Zatarain’s as highlighted in this colourful advertisement which fuses music and food, the lifeblood of the city 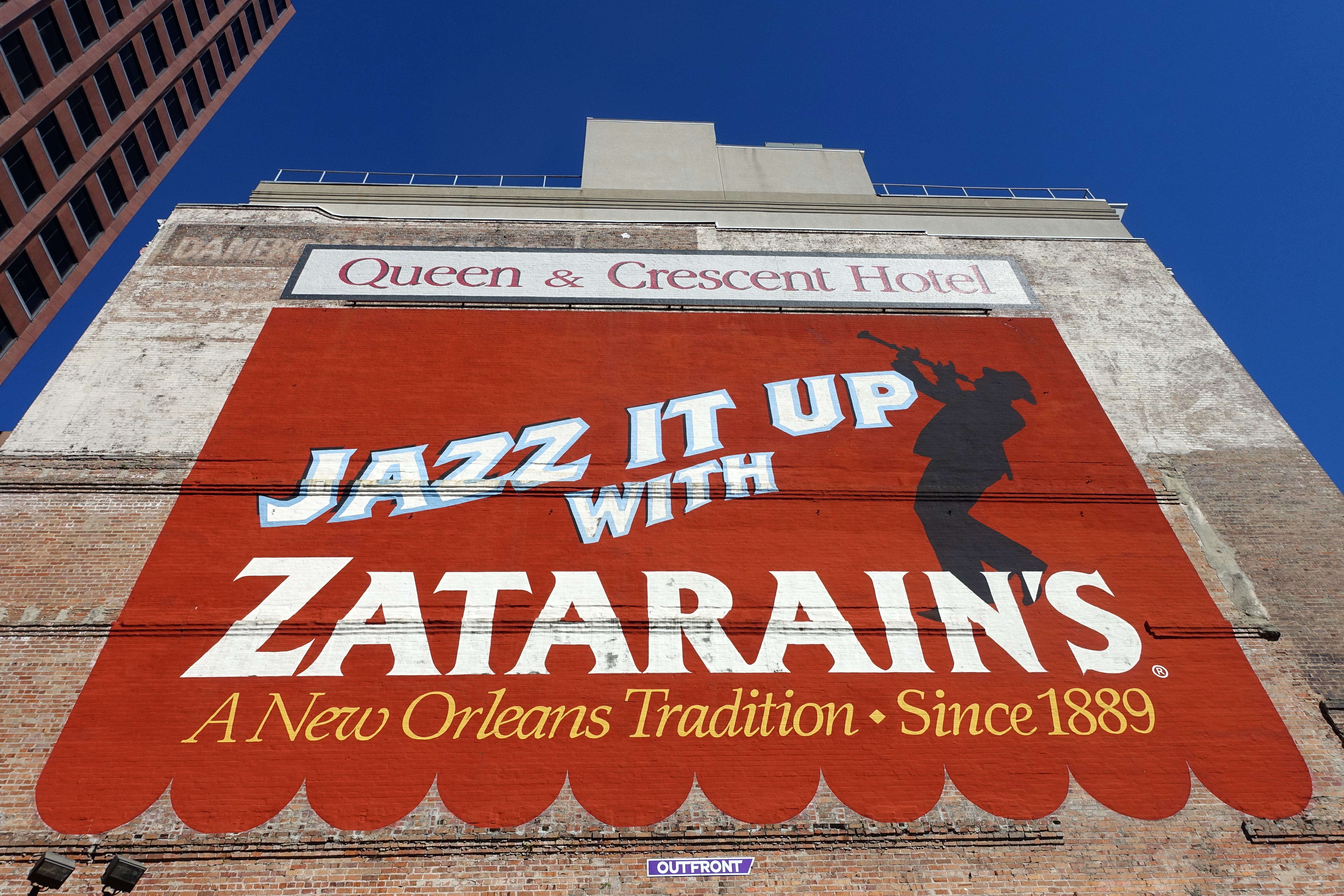