Crossing America by train is a superb way to enjoy some of the country’s most spectacular scenery as well as an opportunity to get to know some fascinating fellow travellers sharing the epic journey from Chicago to San Francisco.

The Zephyr originally ran from 1949 until 1970 when it was withdrawn due to falling passenger numbers. Amtrak, the American rail network revived it in 1983, and it still takes the same 52 hours it required in 1949 to traverse the nearly 2500 miles of the route to the Bay Area of California.

Here is a a more detailed map

We started our journey at Chicago’s magnificent Union station, the location for many famous films such as The Untouchables, Dark Knight and Blade Runner 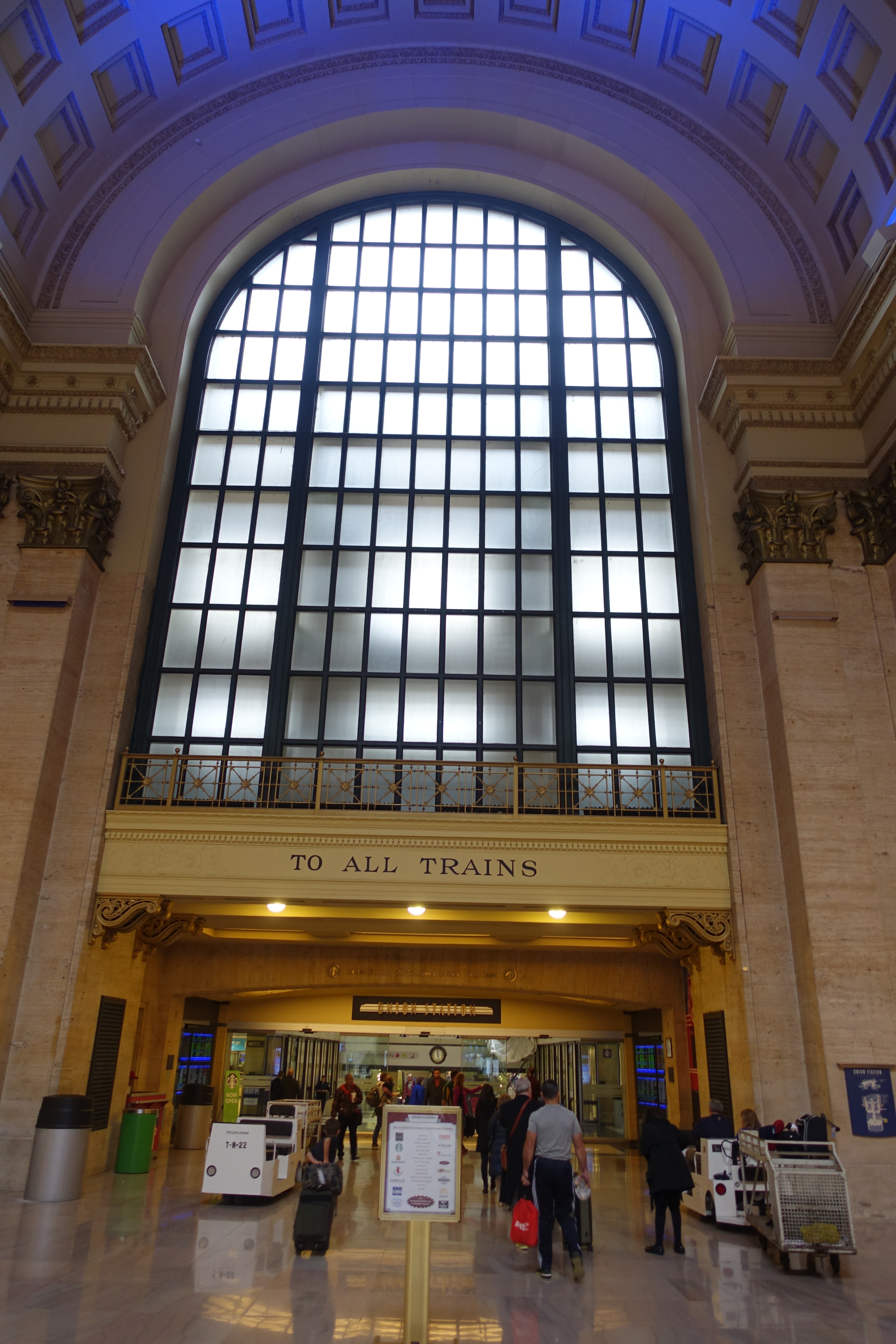 On leaving Chicago we quickly moved into the flat cornfields of Illinois. The train made periodic scheduled stops which sometimes provided a chance to alight and stretch the legs such as in Galesburg.

Despite the many miles of prairies and small towns of Illinois and Iowa, there was a range of interesting sights along the way, such as election posters and small town high streets which had seen more prosperous times. 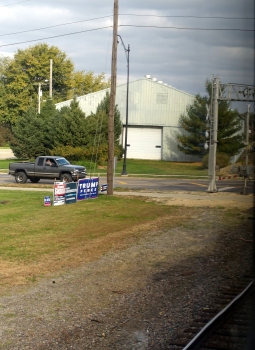 A milestone on the journey was crossing the Mississippi River in Burlington Iowa.

After our first evening meal, it was soon time to retire to our compartment for the night which involved converting our seats into bunk beds – not the most spacious sleeping accommodation but all part of the fun. It required quite careful organisation to maximise the limited available space. The bedtime experience is certainly unique, especially the additional roll you get from being in the upper deck of the carriage at the tail of the train. The continuous blast of the train horn during the night as it roared through the mid-west added an almost 1950’s cinematic touch to the ride. In case you want to share the sound    take a listen. 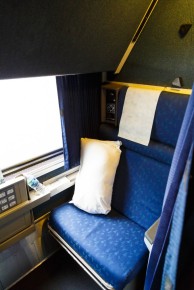 Our first night’s sleep ended as we arrived at Denver’s Union station at dawn. It was quite magical pulling up at the platform just as the sky turned pink on a chilly morning at 7.00 am. We emerged for a 30 minute break to admire the recently restored station which was buzzing with commuters rushing to grab their morning ‘artisan’ espressos. Judging from the station, it certainly justified Denver’s reputation as a thriving hi-tech and financial centre, the ‘Wall St of the Rocky Mountains’. 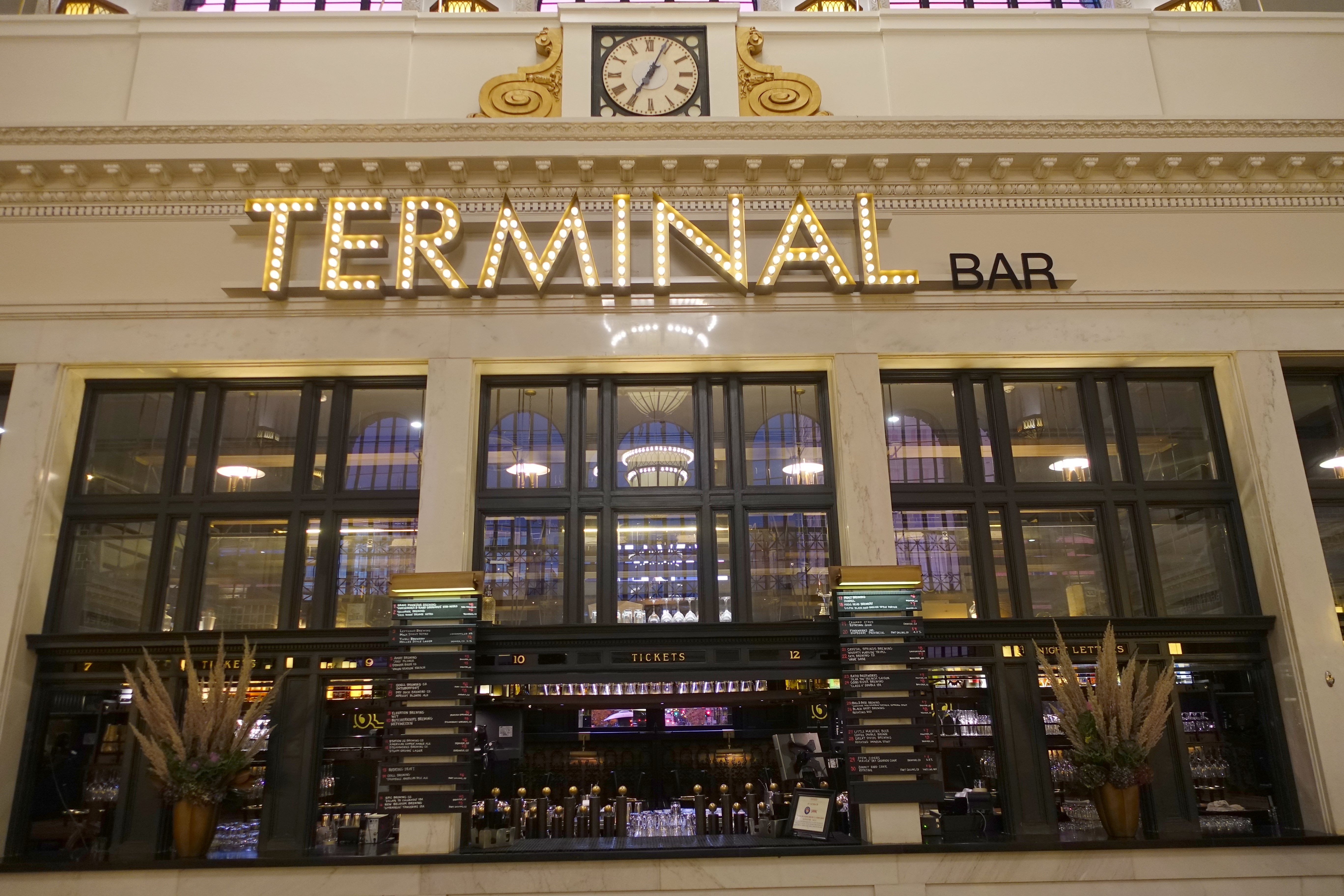 Climbing through Colorado, the scenery was becoming very attractive as we snaked though the Rocky Mountains (including 33 tunnels), crossed the Continental divide at over 9000 feet, and began travelling alongside the Colorado River via some spectacular canyons. 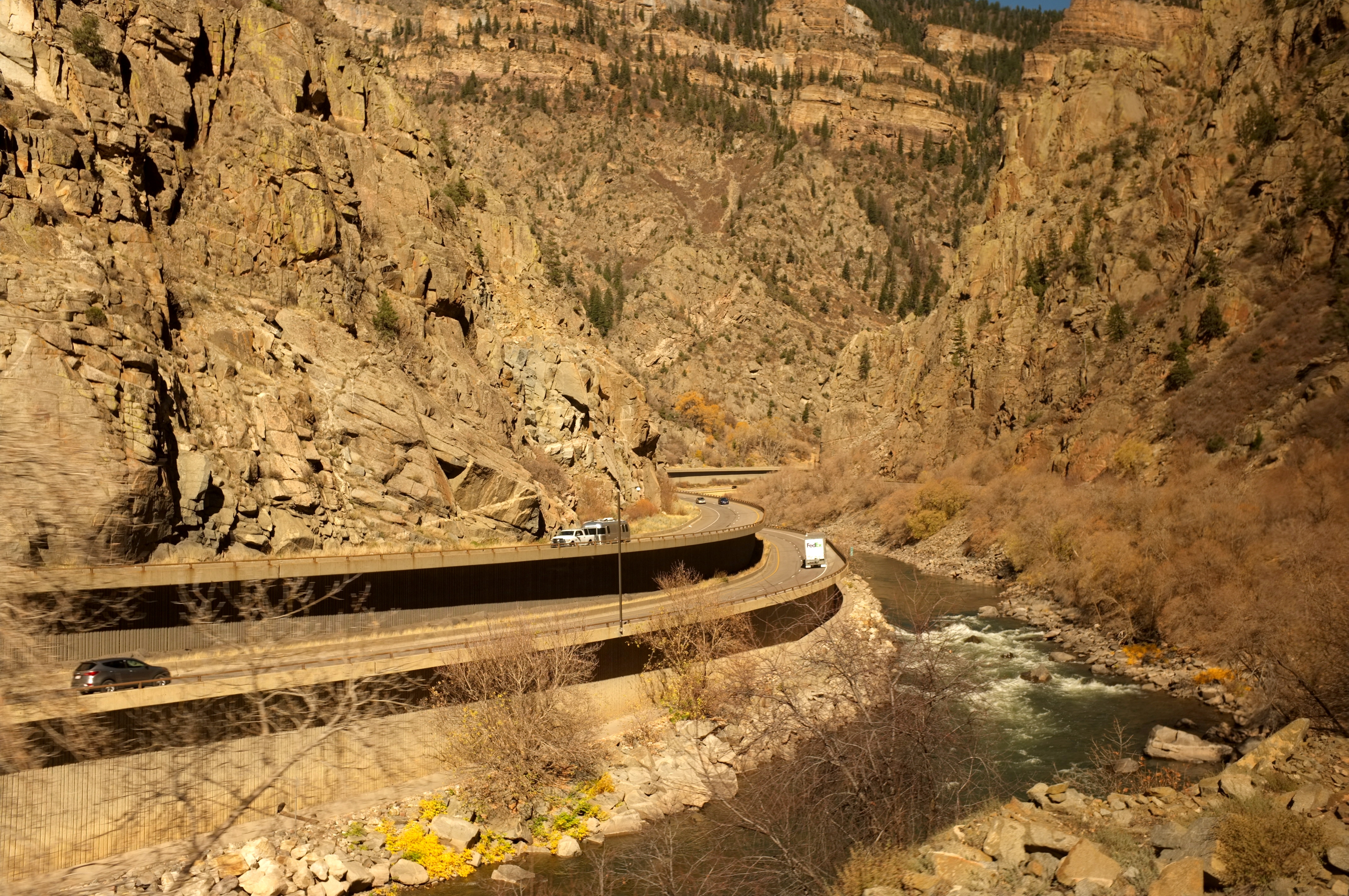 Apart  from the beautiful landscape,  the most memorable aspect of the journey was our encounters with fellow passengers, whether in the observation car or during mealtimes, when the choice of sharing the dinner table was left to the catering manager.

Our first such encounter involved a man who without much prompting, began pouring out his life story about the rise and fall of his rental business (he ended up in jail) and  which climaxed with him tearfully rueing the fact his sister had financially (and morally) betrayed him whilst he was in jail, and he was only now recovering from bankruptcy and depression.Another  passenger casually revealed she had just left her man in Alabama (‘a bad situation’), was carrying all her belongings in a suitcase, and starting a new life in Oregon. Aside from these rather down beat stories,  we met many delightful passengers from very diverse backgrounds, the only common factor being the joy of travelling by long distance train.

Come the need for rest or privacy, we could retreat to our compartment and bed, but the hardy Amish family in the picture spent the whole journey at their observation car table.

Our last two stops in Colorado included Glenwood Springs and Grand Junction. The last call on the notice board (in the second picture) had to be taken seriously for those passengers stepping off for a short break. We later learned we had left one passenger behind in Reno – a regular occurrence according to our conductor. 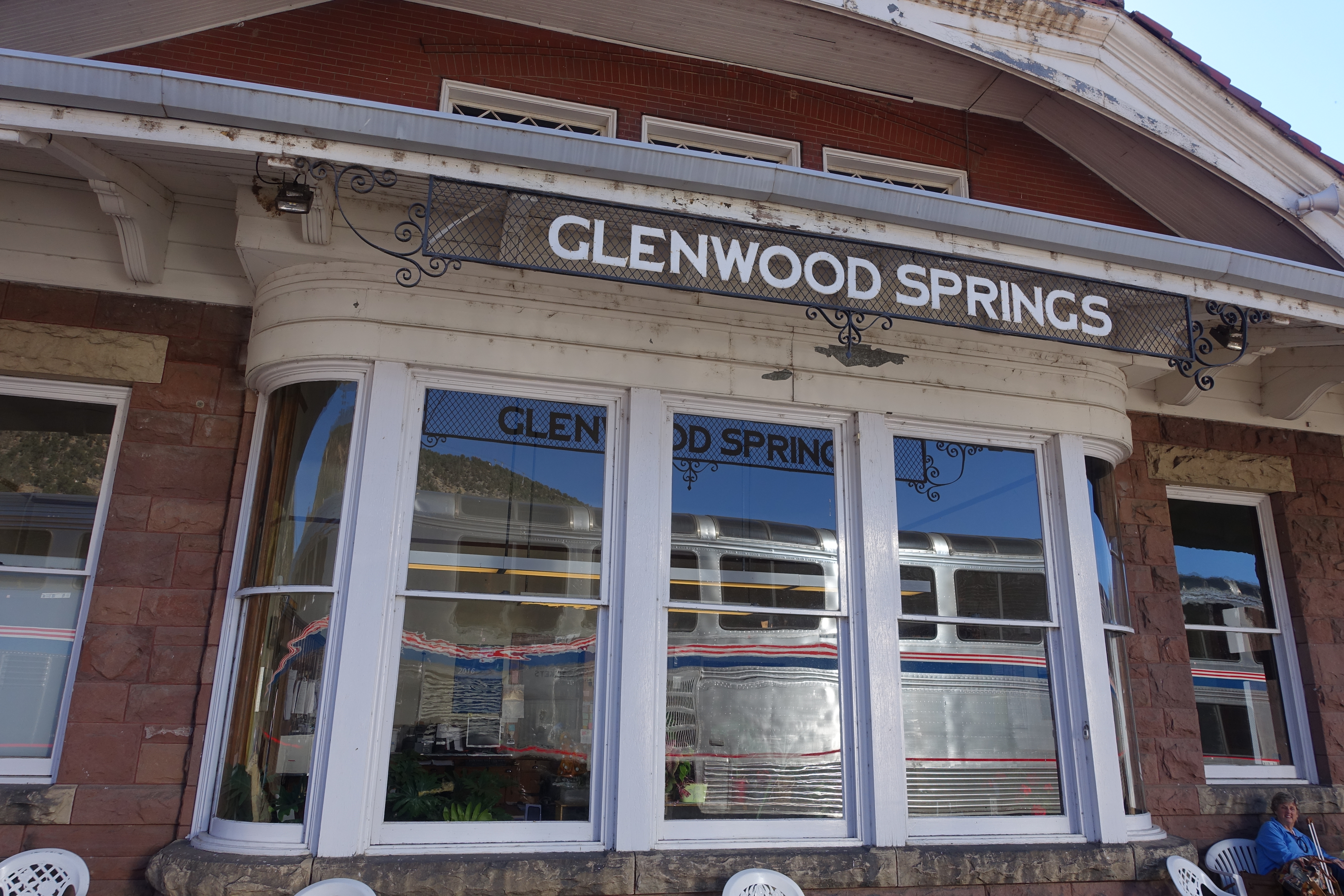 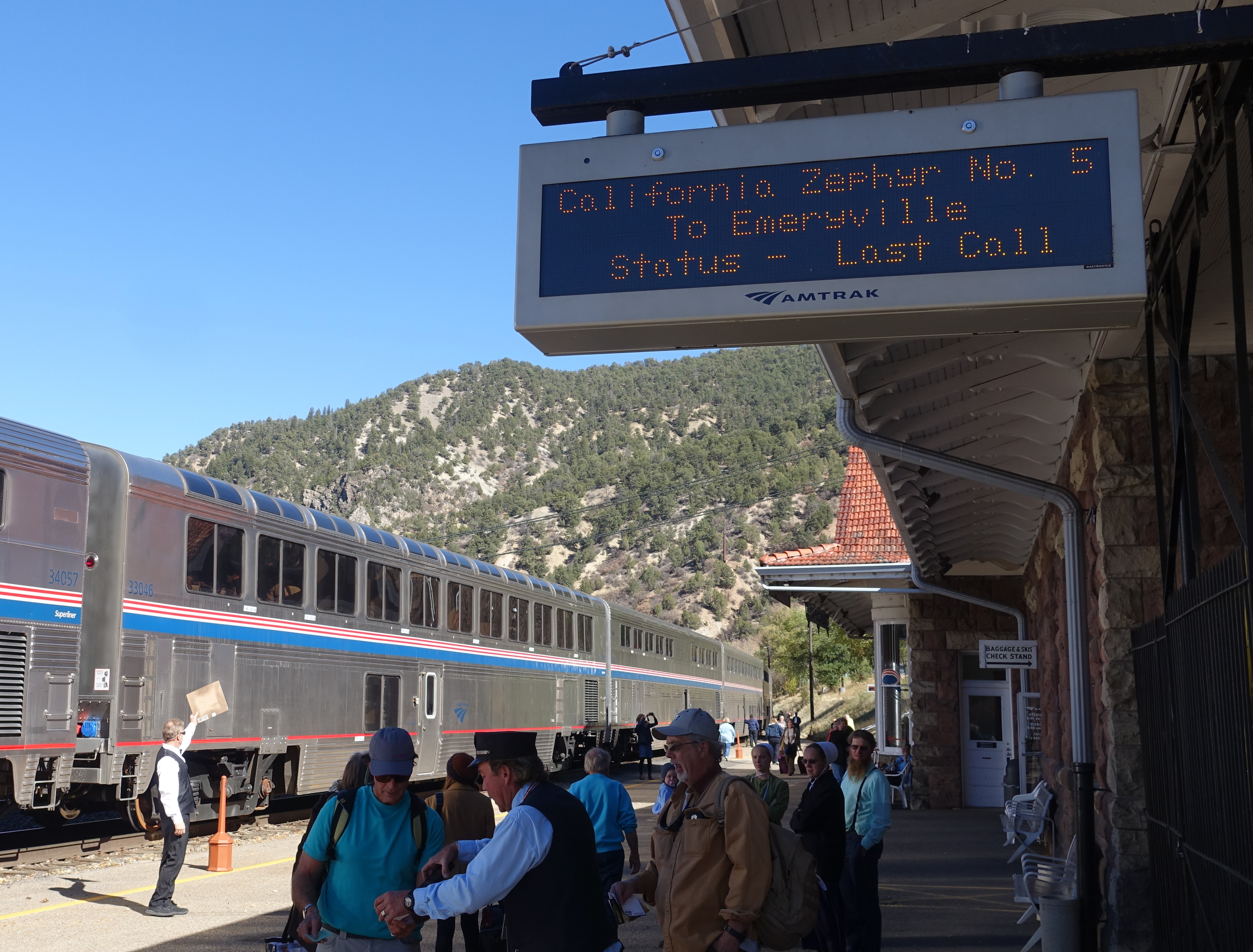 As the sun lowered and we crossed over the state border into Utah, the view from the train became quite riveting. It began to feel like the wild west. 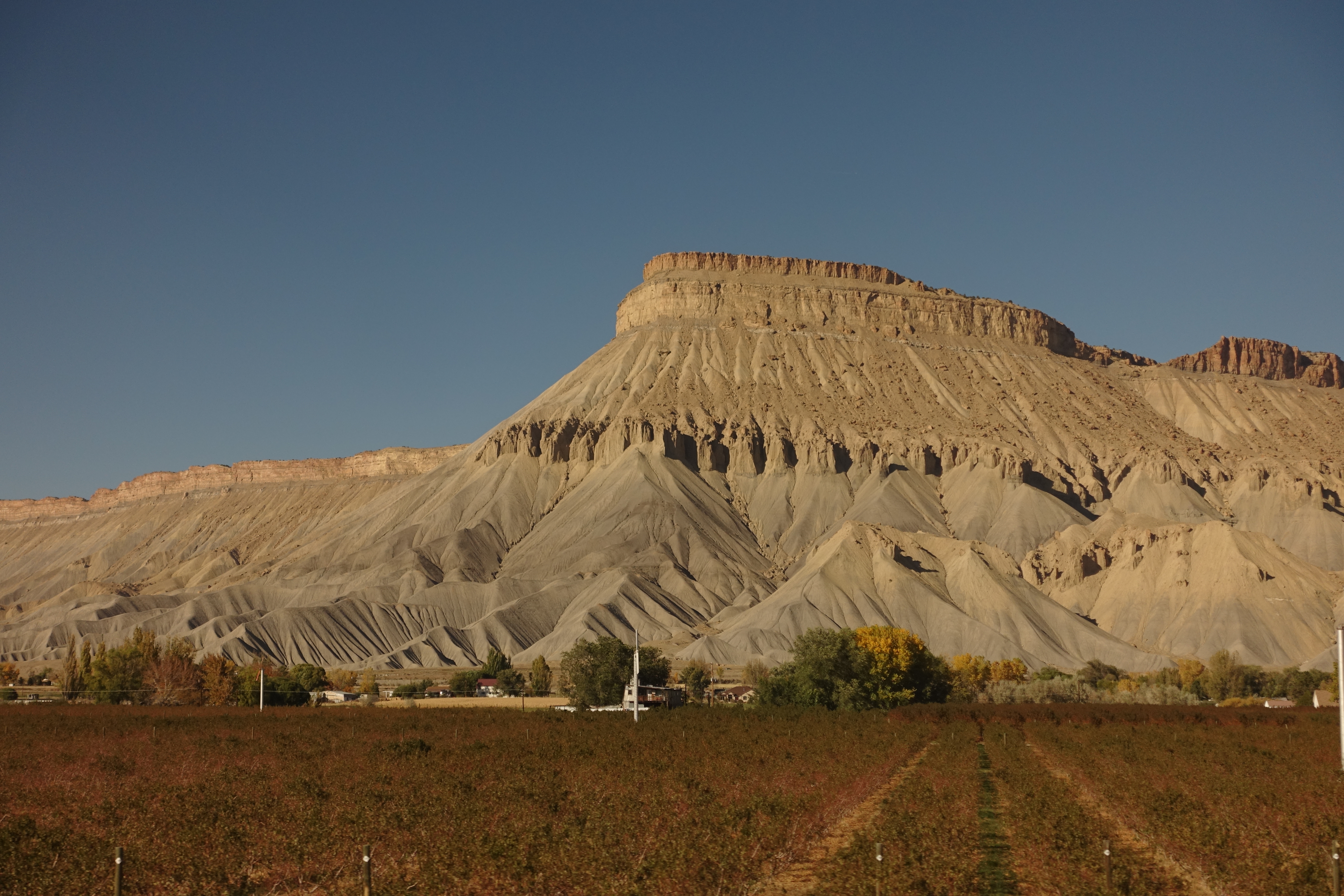 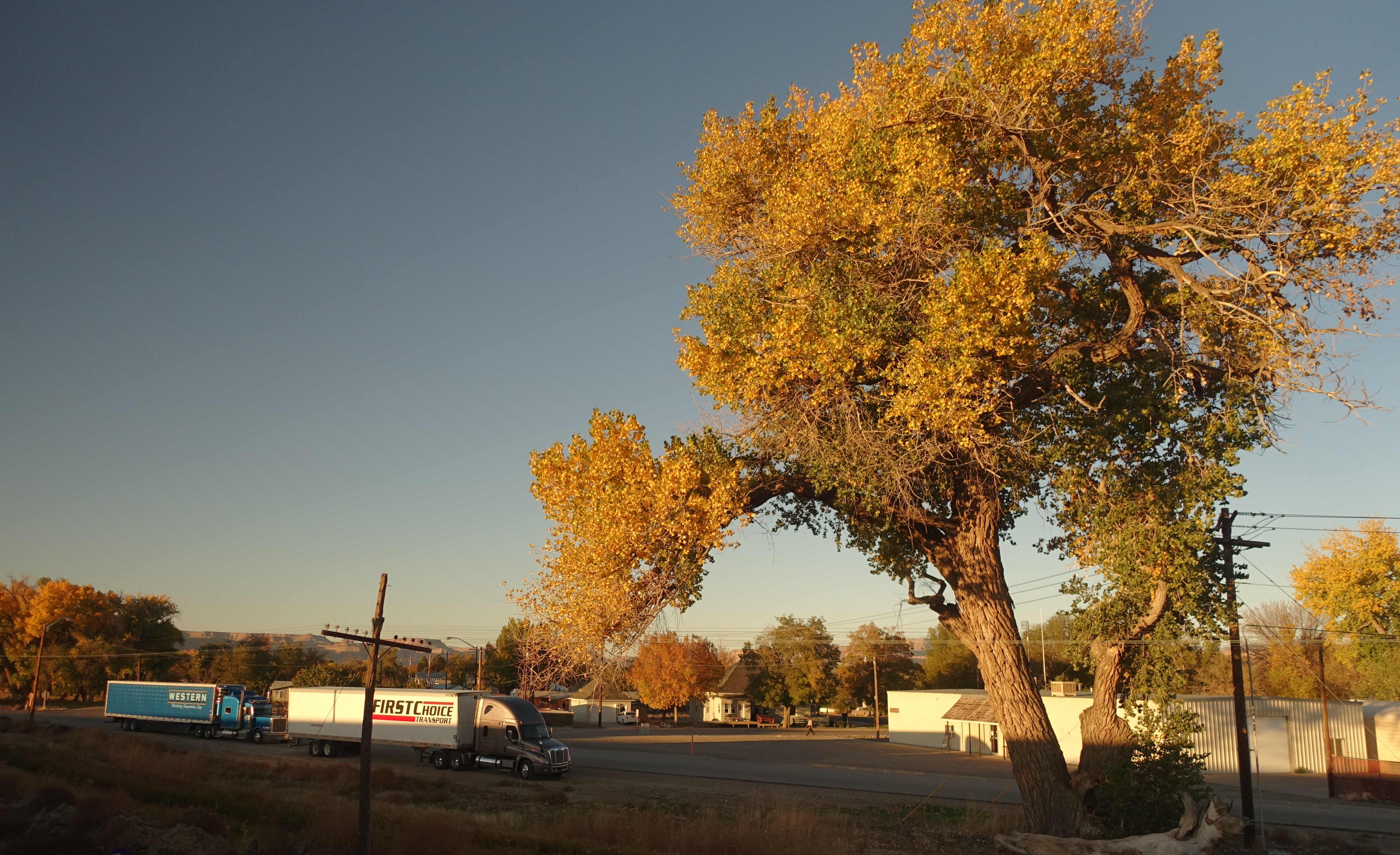 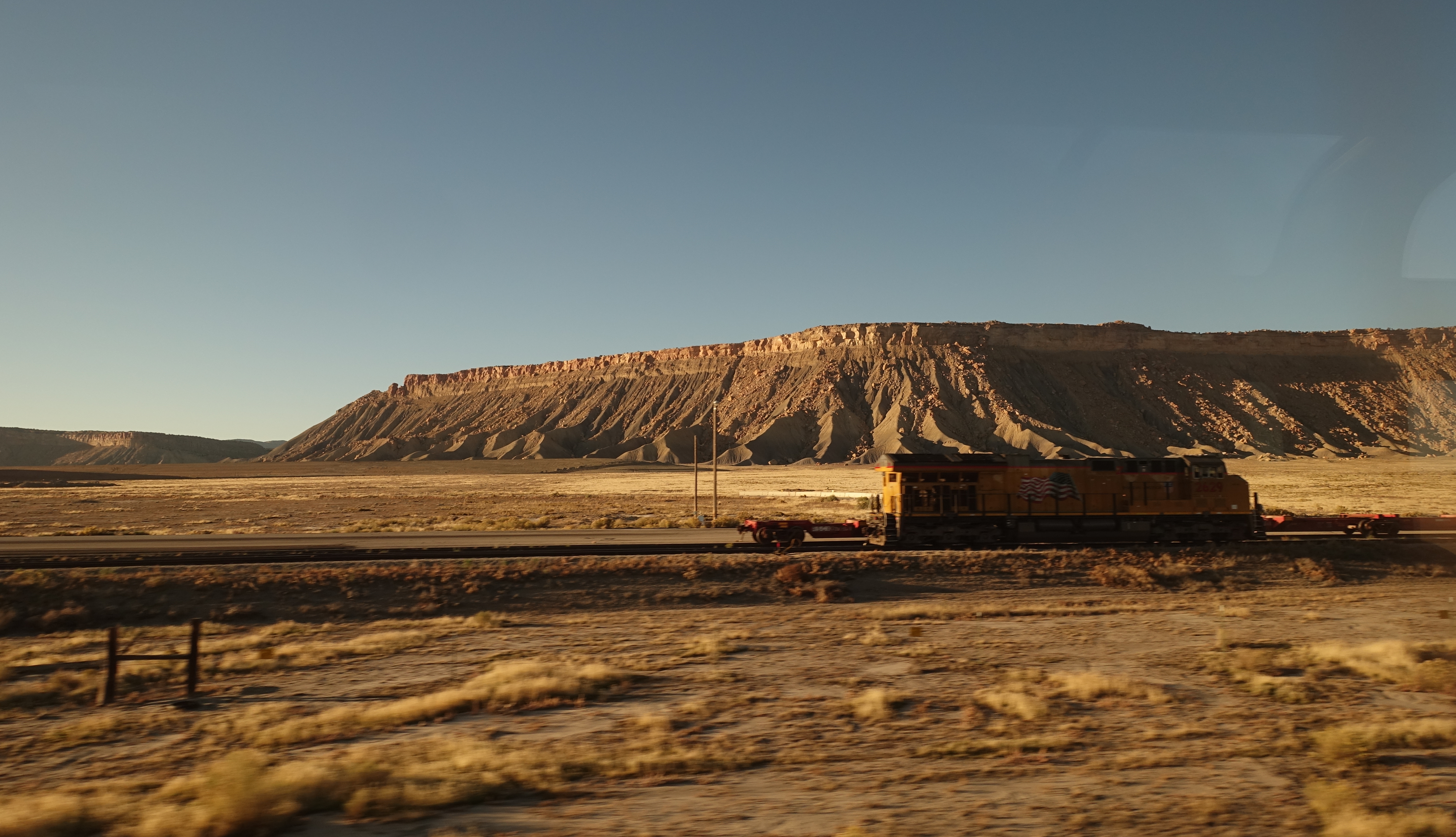 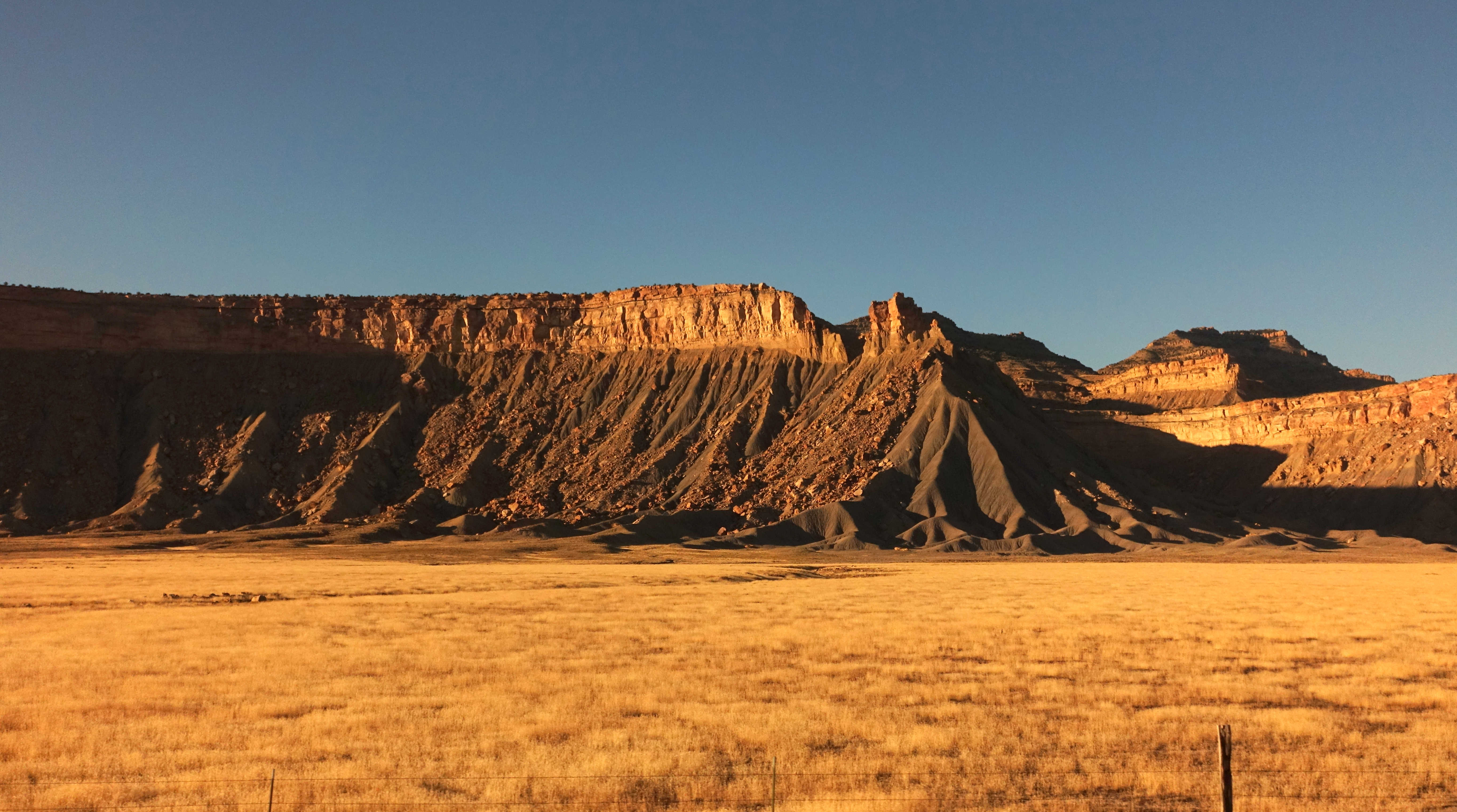 As the sun set over the Utah desert we passed by two largely abandoned towns, Cisco and Thompson Springs, which had featured in the film Thelma and Louise. One of those moments when it was frustrating not to be able to get off and explore.

During our second night we stopped at Salt Lake City, and then travelled across the salt flats before entering Nevada. Breakfast was served as we pulled into Reno. Before long we had crossed the state boundary into California. Our first two stops were Truckee and Colfax 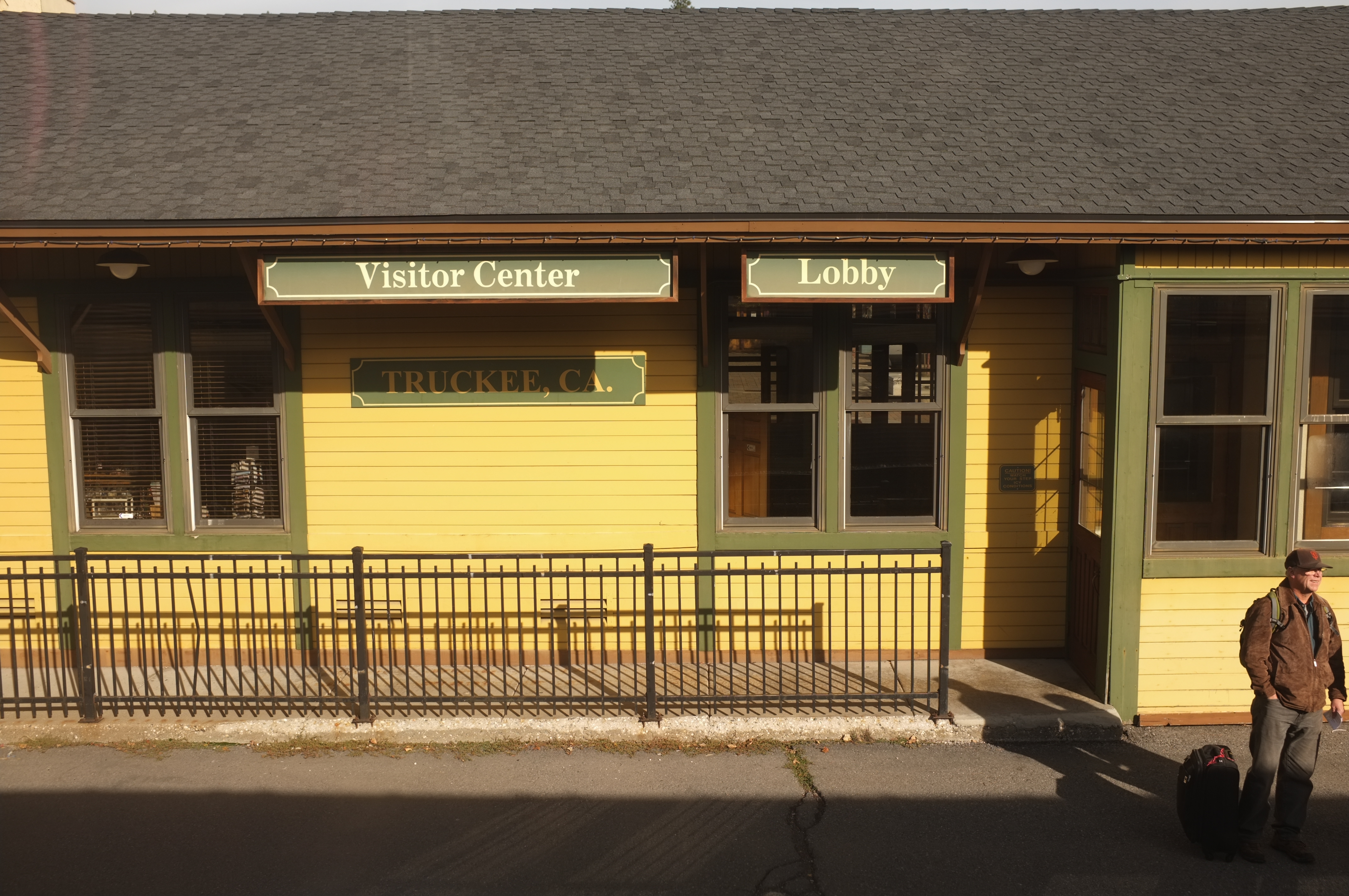 At this stage an Amtrak employee provided commentary (from a script) as we traversed the Sierra Nevada and passed through the Donner Pass. Not everyone was fully engaged with his revelations. 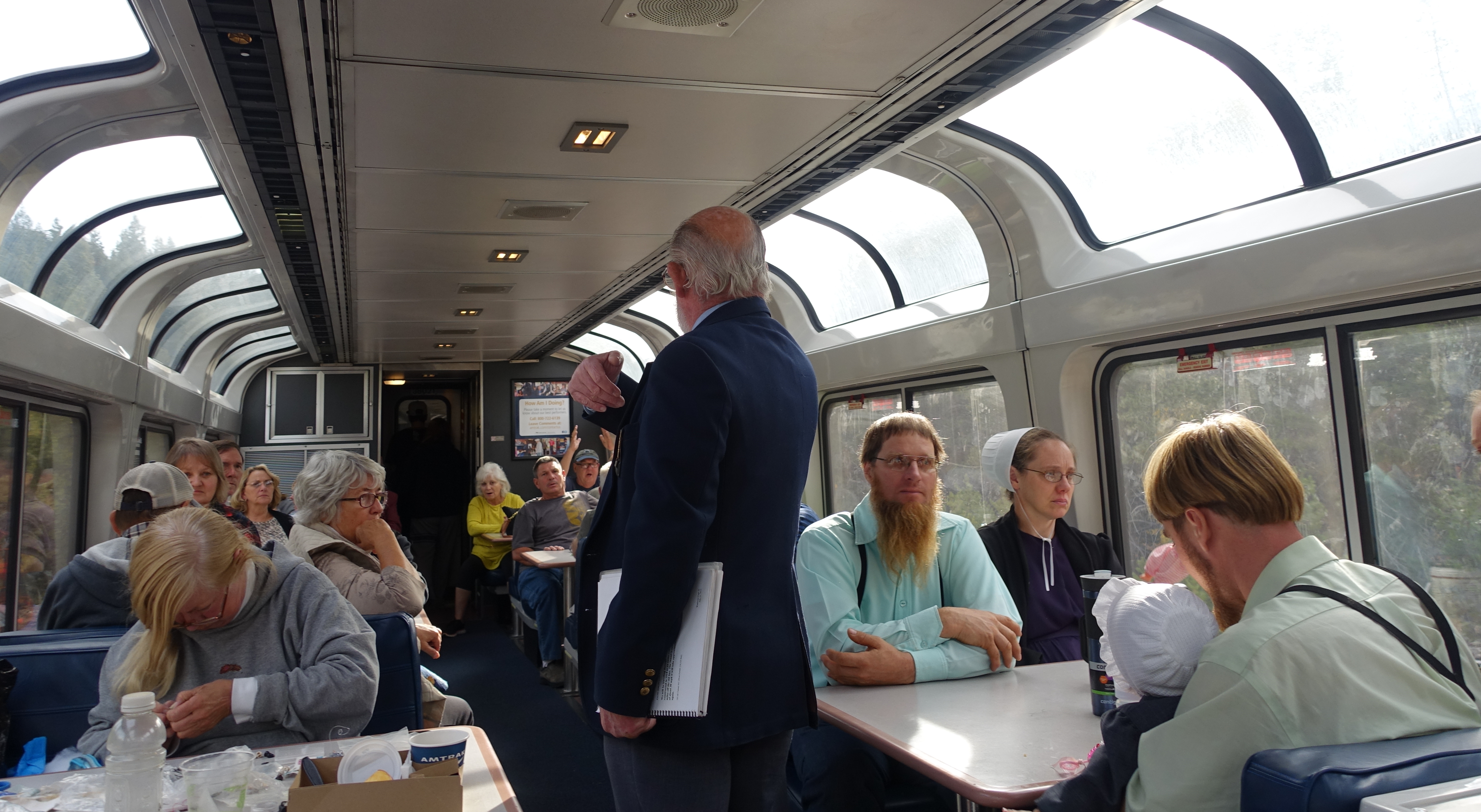 By now we were a little punch drunk on the scenery but just as intrigued by the range of passengers we were meeting – a hirsute delivery driver regaled us with his tales of panning for gold in the hills, an activity I assumed had long since been abandoned.

After a largely neglected lunch – the rather bland Amtrak menu had become a little repetitive, we soon descended into Sacramento, the state capital, followed finally by the long coastal skirting of the San Francisco Bay Area. Compared to the grandeur of Chicago’s Union Station, it was somewhat anti-climatic to arrive not at San Francisco but the neighbouring small city of Emeryville, amazingly nearly an hour ahead of schedule. 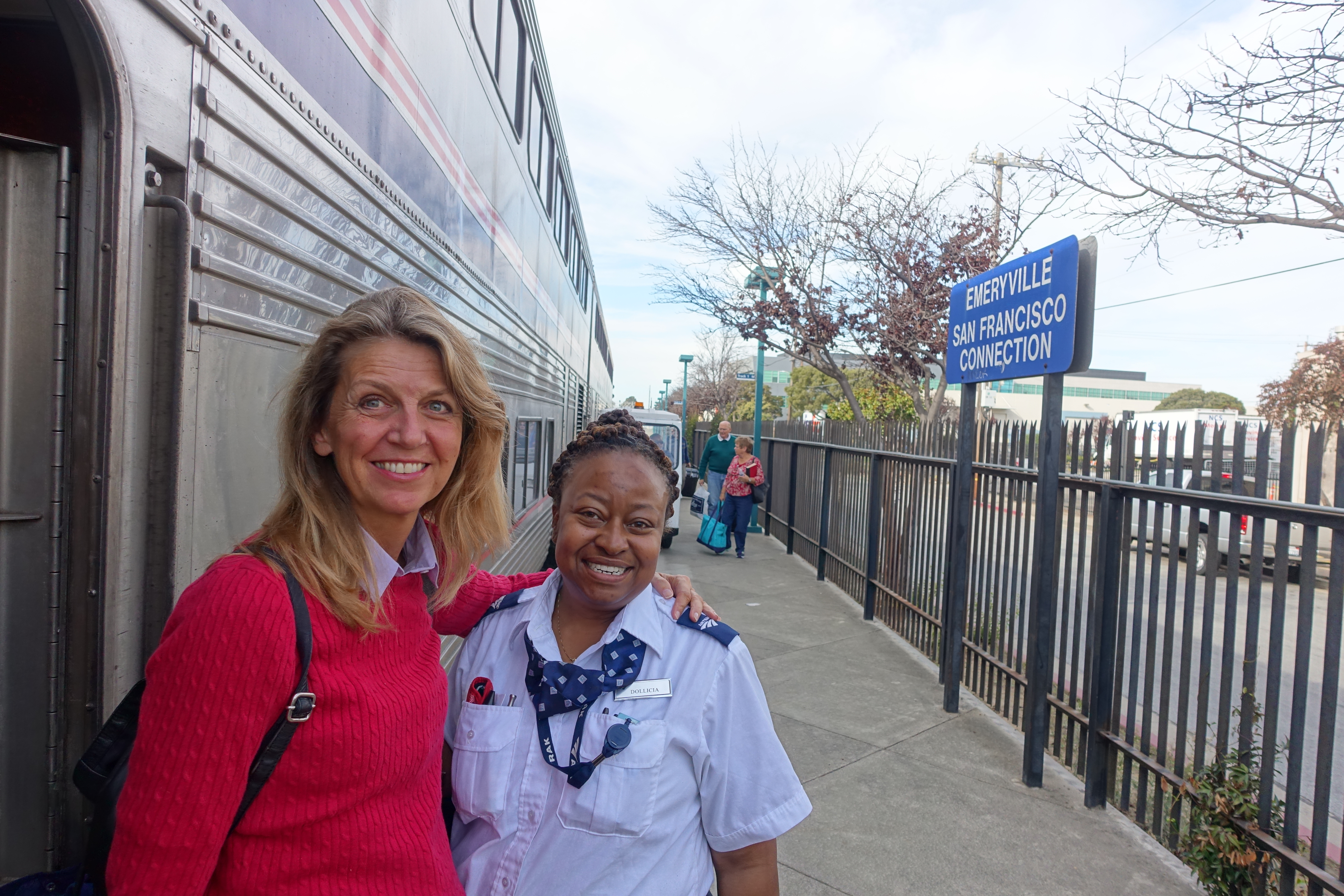 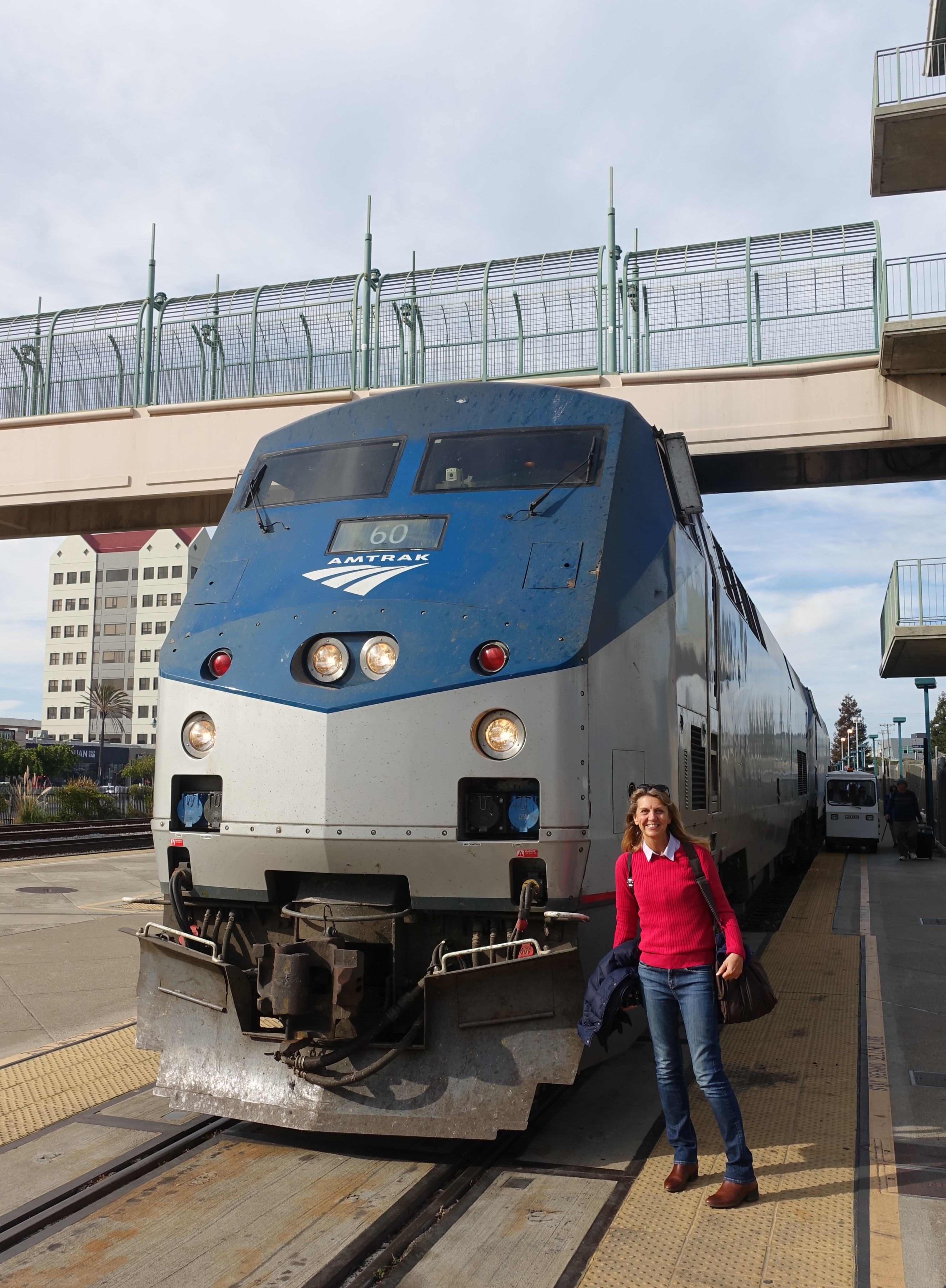 A little exhausted, but still feeling a residue of euphoria from our memorable journey, we were glad to be met by friends, and could soon enjoy watching the sun set over San Francisco’s Golden Gate Bridge whilst we sipped our beer across the bay in Berkeley.