Bologna is known in Italy as ‘La Dotta, La Rossa, La Grassa’ which roughly translated  means ‘educated, red and fat’. Educated, because it has Europe’s oldest university (1088) and currently numbers 85000 students across its several campuses. Red, because of both the colour of its buildings and its socialist political allegiance, and fat because it is seen as the culinary capital of Italy.

Like many Italian cities, Bologna’s historical architecture is very striking but what is truly remarkable are its porticos (covered walkways) which reputedly stretch for about 25 miles. 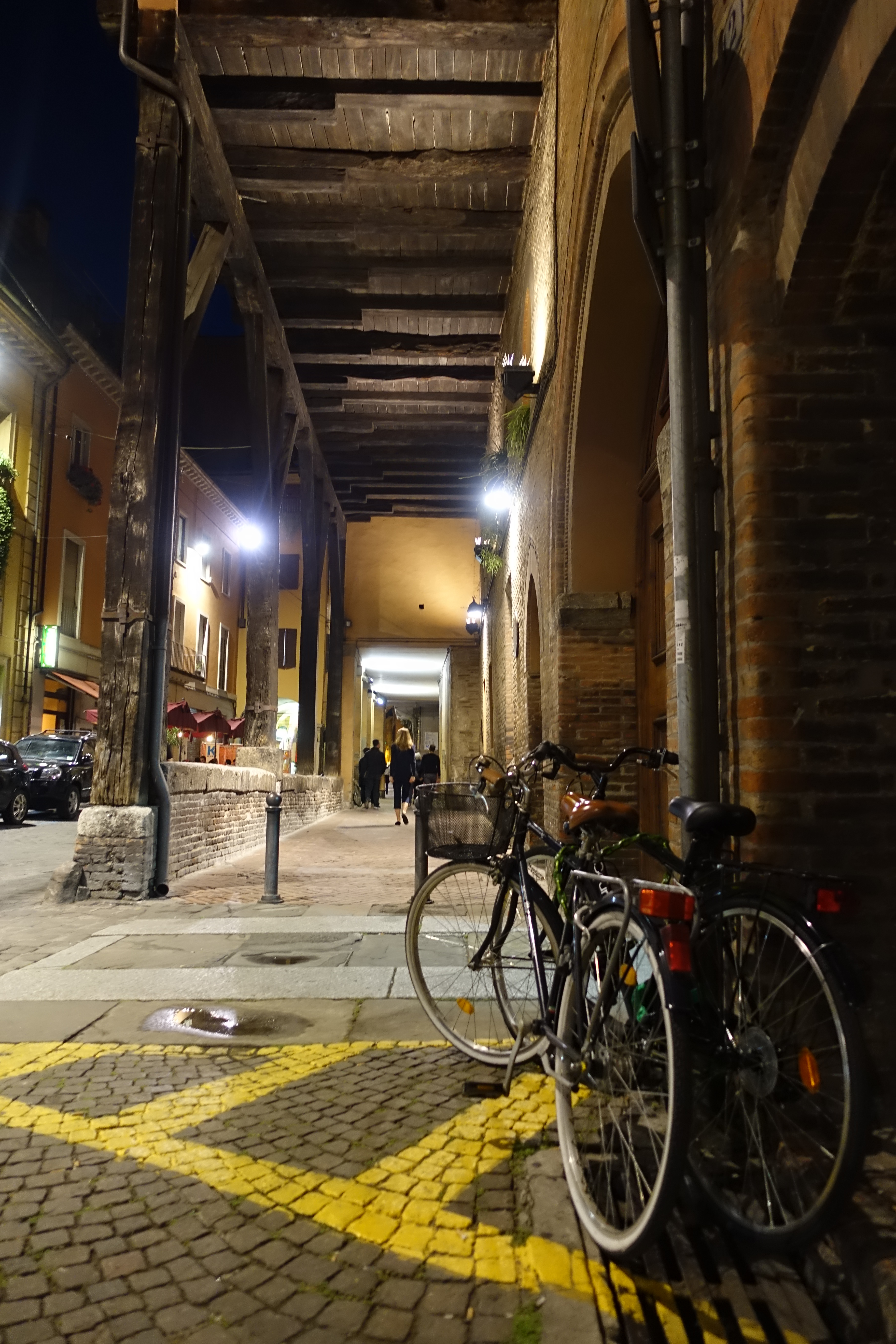 The racks of vintage magazines by the historic Libreria (bookshop) Nanni 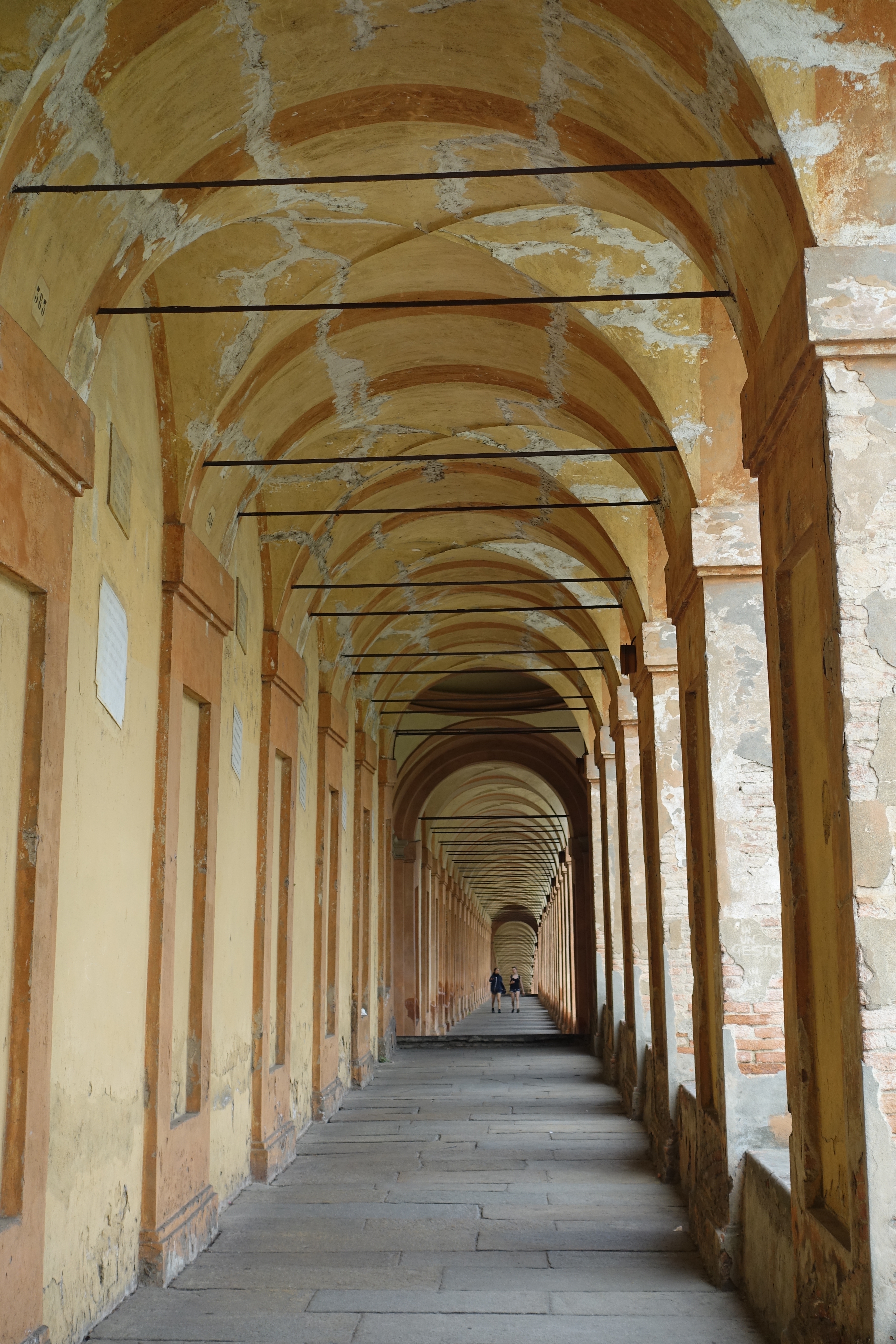 The portico leading up to the San Luca Sanctuary is the longest of Bologna’s porticos, stretching for nearly 2.5 miles with 666 arcades. It appears to be a popular route for dedicated local runners

Apart from their beauty, the ubiquity of the porticos mean you can easily navigate the city without the need for an umbrella (apart from crossing the odd road).

In addition to the porticos, Bologna was once famous for its proliferation of towers, sometimes seen as the forerunners of the modern skyscraper, such that it has been dubbed as once being the mediaeval Manhattan.It is thought that they were constructed mainly as a show of status and/or defensive refuge. Only a few survive, the most notable being the original ‘twin towers’, 12th Century Due Torri. Only one of these, the  Asinelli Tower, is still intact, and it can be ascended (via 498 steps) for a superb view of the city. 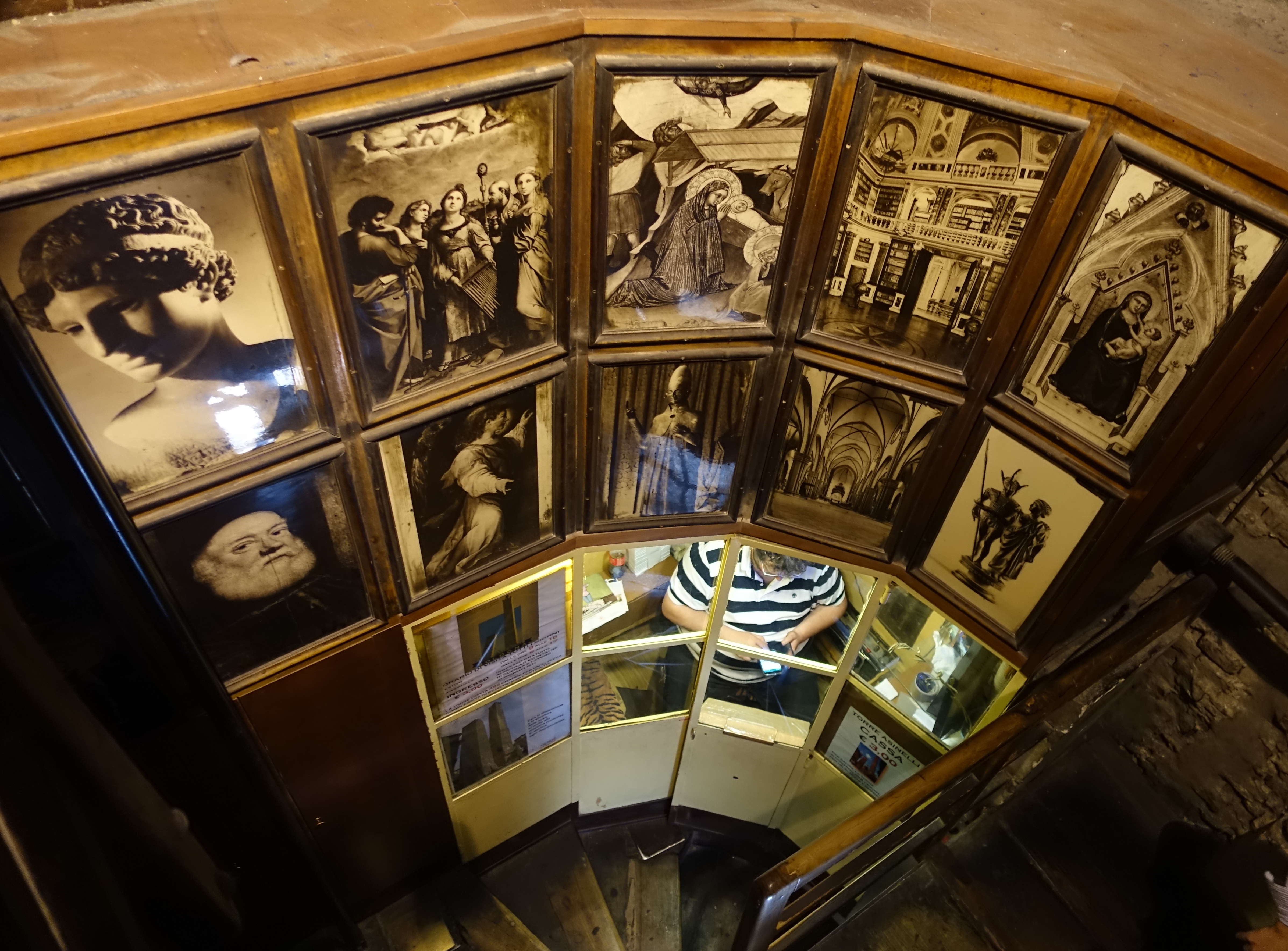 The start (and finish) of the climb.

Bologna is a foodie’s delight.In the quadrilatero, just off Bologna’s main square, the Piazza Maggiore, you can find some of Bologna’s finest food stores as well as places to sit and enjoy a taste of cheese, ham, tortellini, etc. 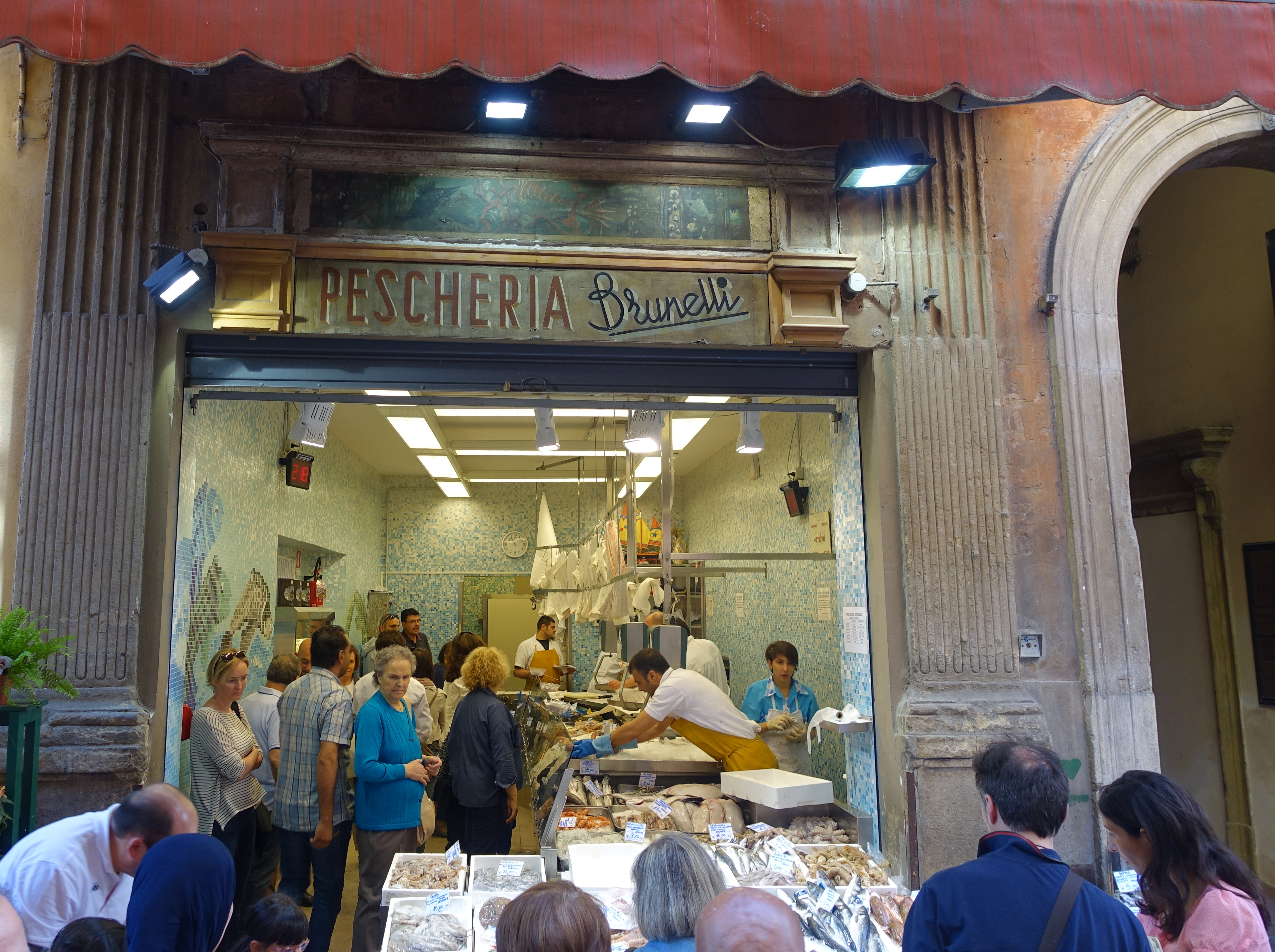 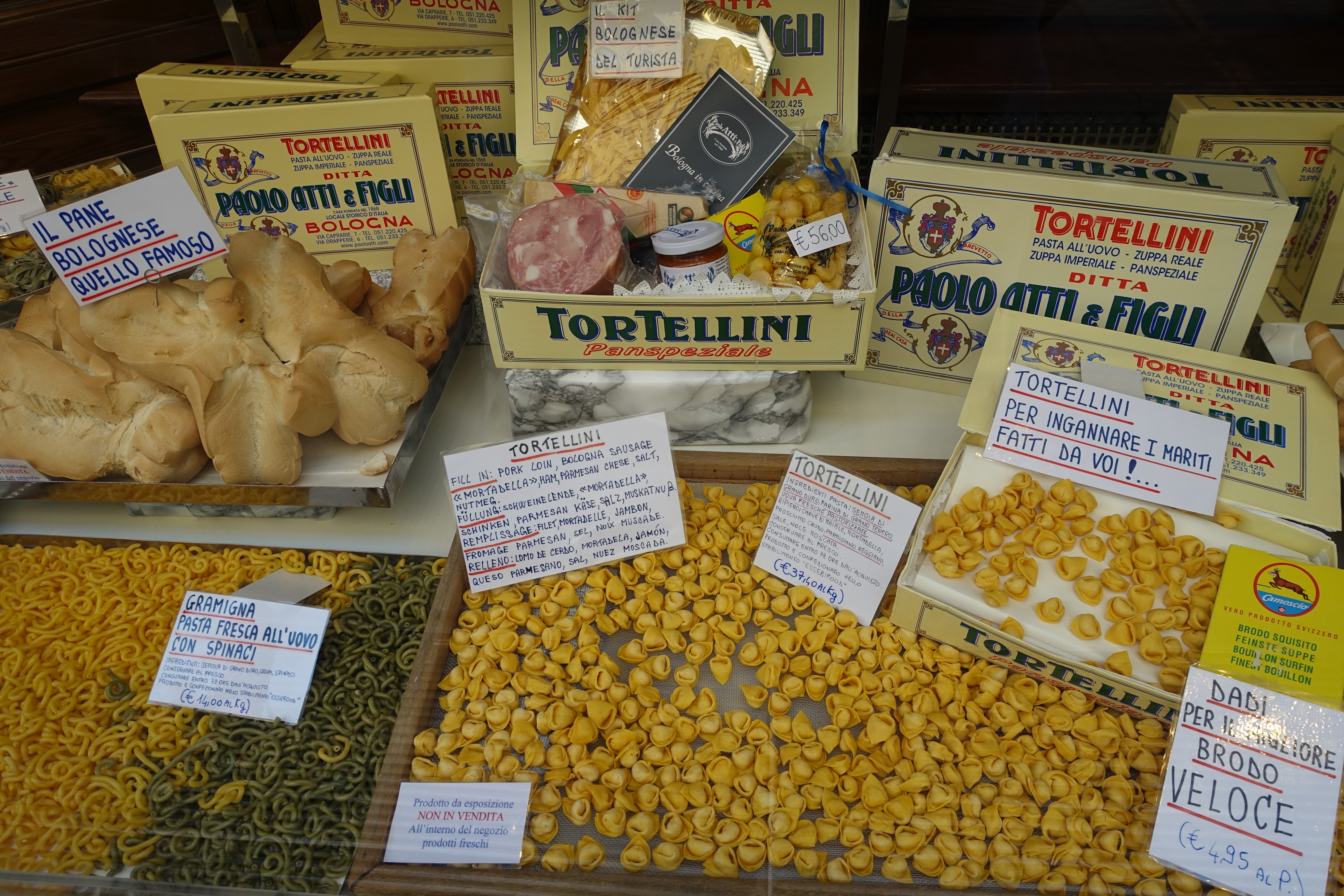 Tortellini is Bologna’s most popular pasta choice, but you will also find several other pasta shapes rarely found in British restaurants or supermarkets e.g cappelletti, cavatelli, gemelli, and orecchiette

One notable venue for sitting down to enjoy your takeaway food is the Osterie del Sole, a wine bar dating from 1465, which serves only wine and beer, and which positively encourages you to bring your own food. 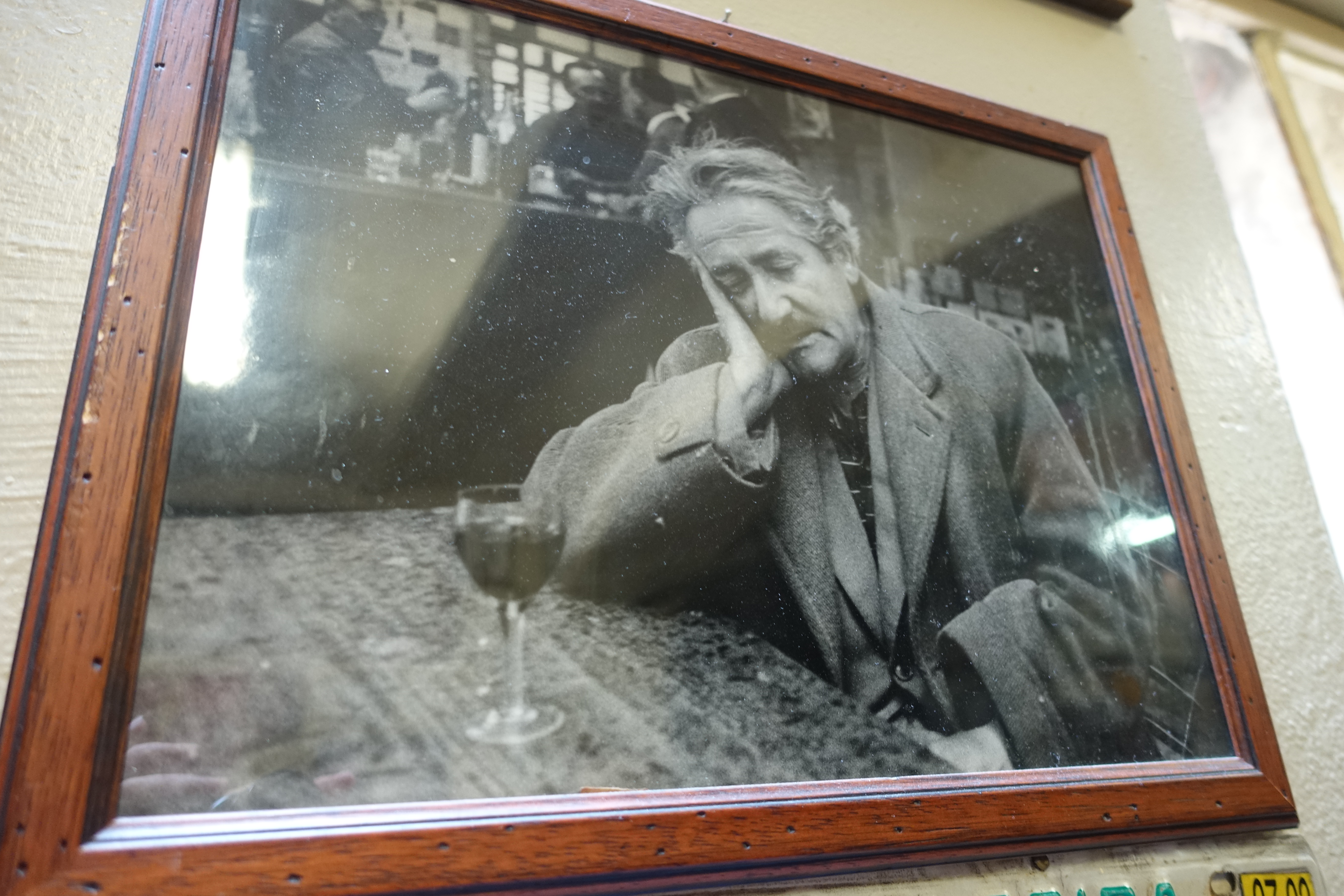 It is not the most obvious place to discover as there is merely a vino sign above a doorway. We initially popped in naively hoping for a mid morning coffee. Whilst exiting, we noticed some of the local senior citizens had already gathered for a convivial morning drink. 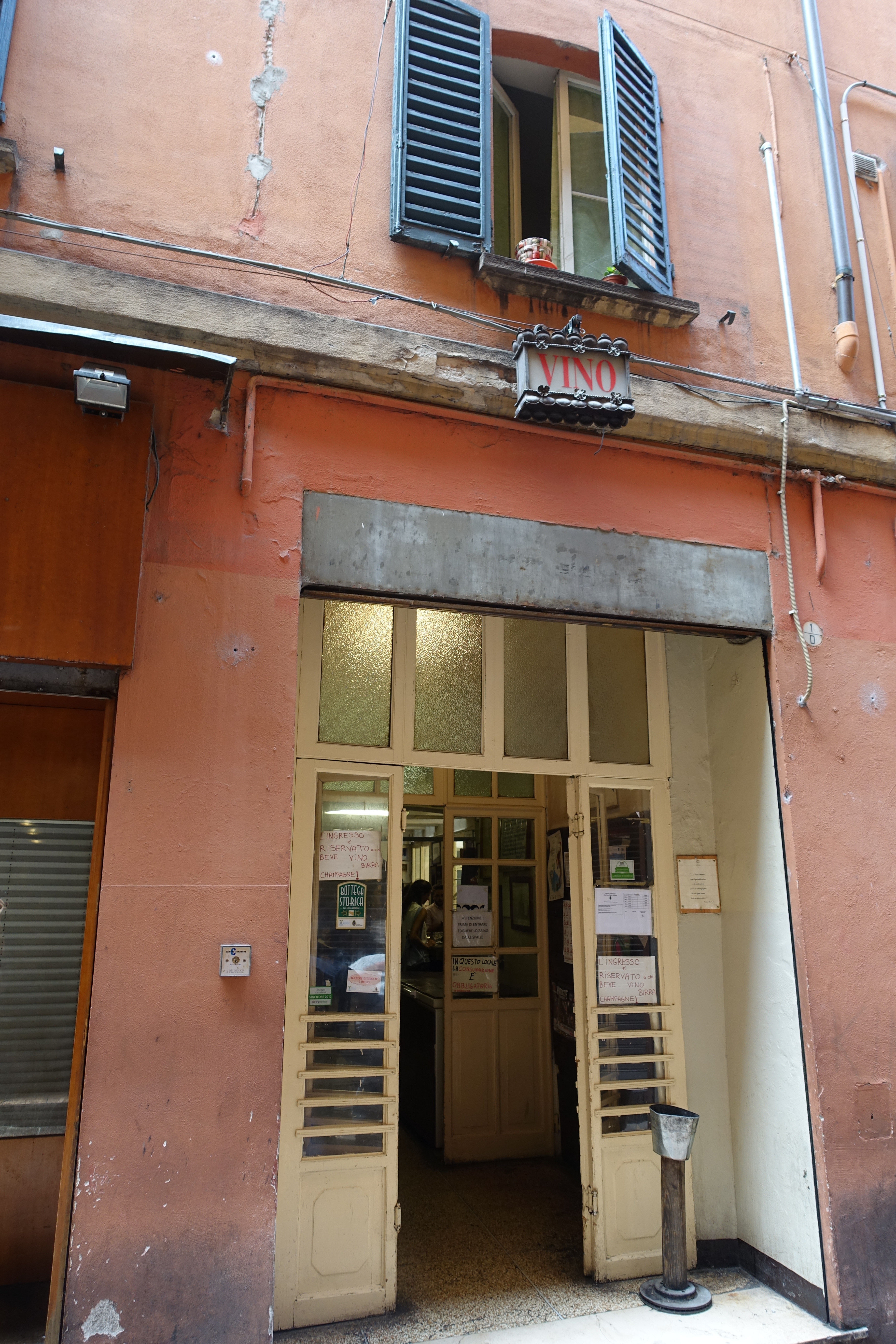 Equally historically atmospheric is the Donatello Ristorante adorned with dozens of pictures of past patrons.

Bologna is more socialist than devoutly Catholic. However, on the edge of the quadrilatero, we came across a local priest trying to raise money by selling a range of religious items under the shadow of an engraved mural celebrating Padre Marella, a Bologna priest who had helped destitute boys. 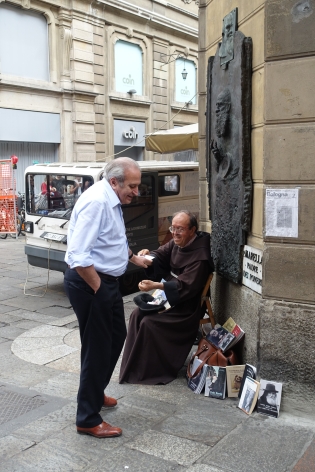 He seemed to be doing quite well as he was counting a hefty wad of euros.

One of the highlights of our visit was unexpectedly gaining access to the Cathedral bell tower on the Saturday night of our visit (it was a fund raising event). It was a chance to see Bologna in its night time glory.

The church on the distant hill top is the San Luca Sanctuary which is linked to the city by the world’s longest portico,  2.5 miles in length.

Much to our delight, an Edward Hopper exhibition was widely advertised during our stay. 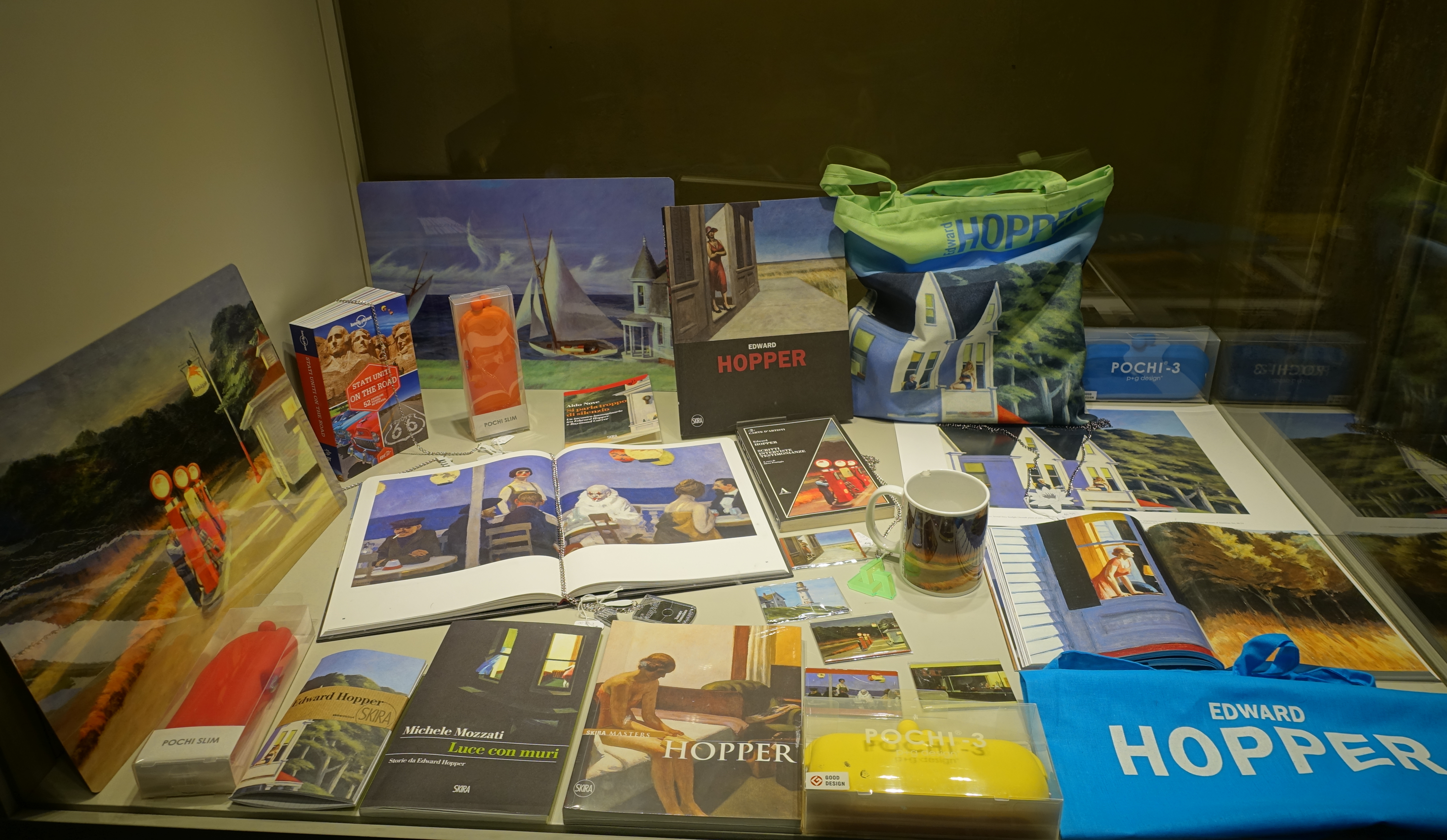 Bologna is close by a number of very attractive towns including Ferrara which was ideal to explore by bicycle. 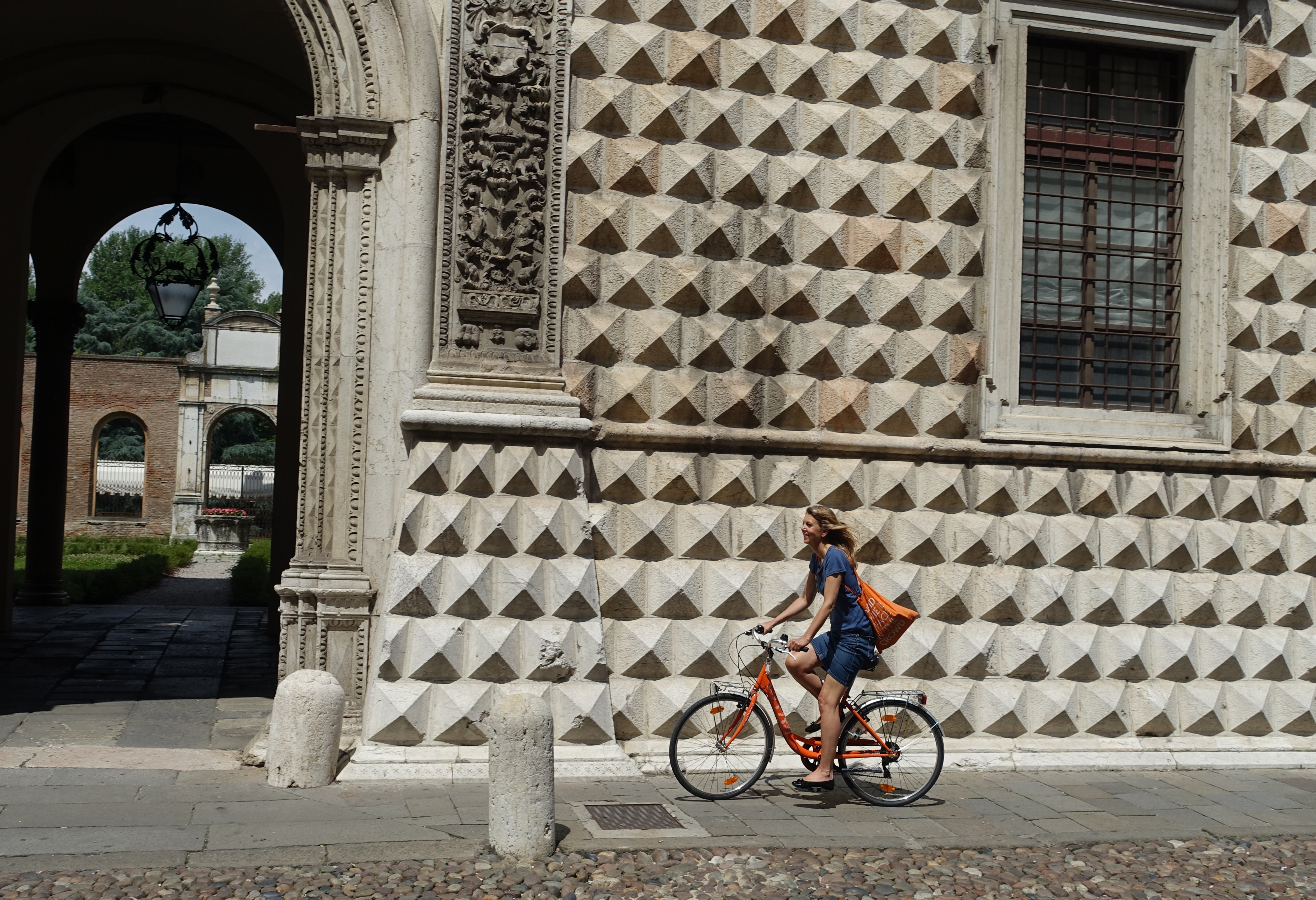 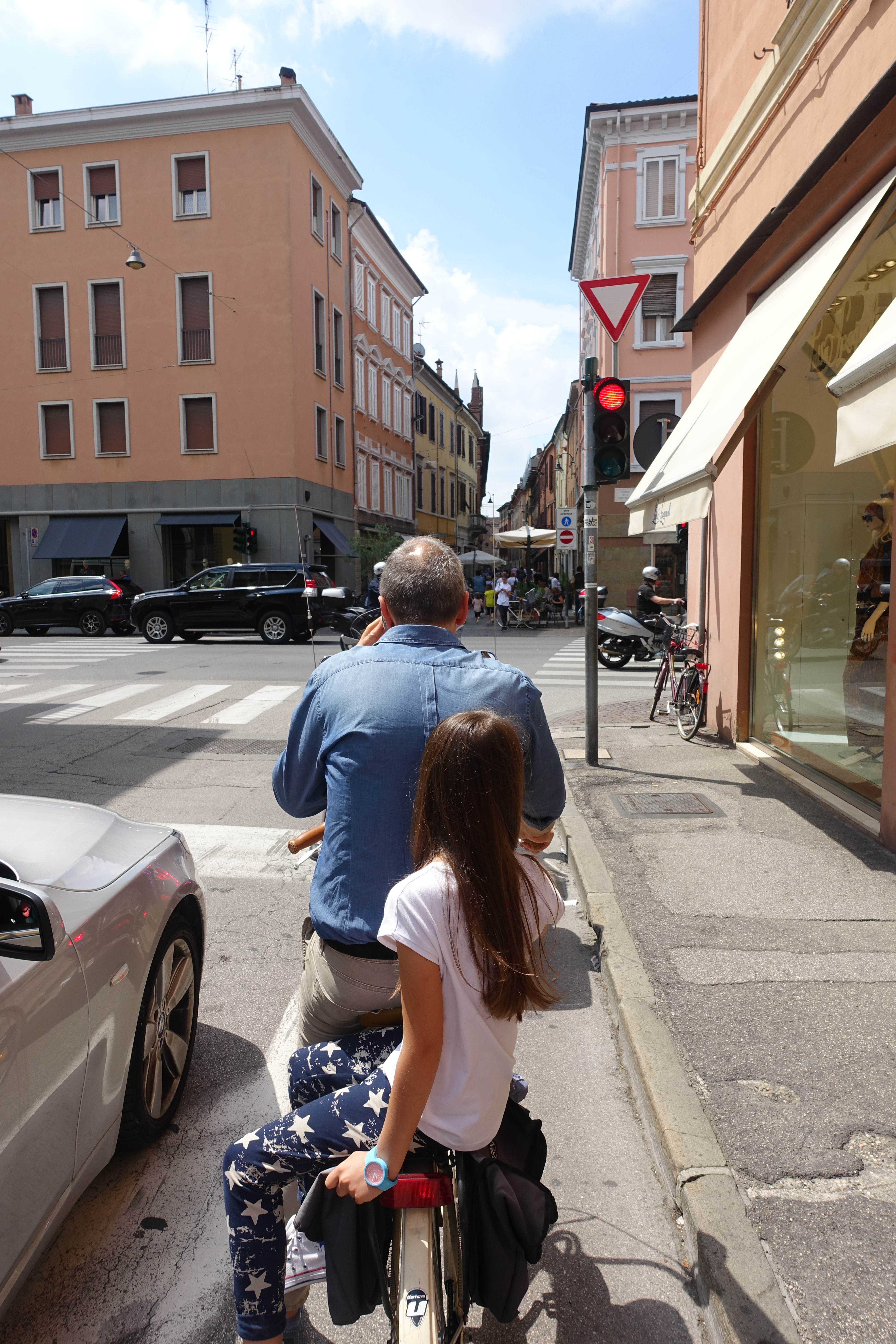 Yes he is talking on his mobile whilst his daughter is riding on the back.. Glad he wasn’t trying to text as well.

Despite the warm sunny weather the town was awash with umbrellas 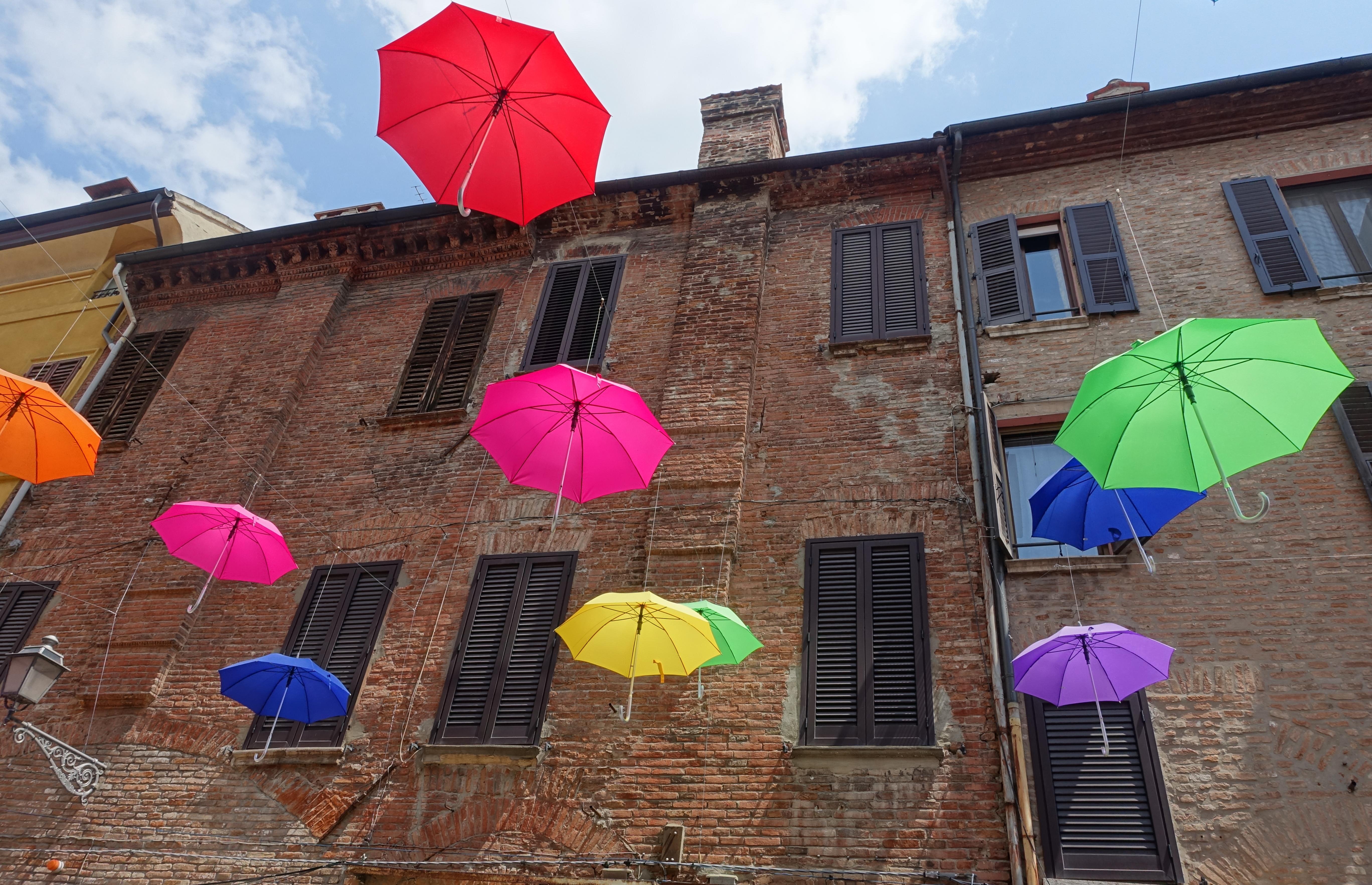 And just to show Bologna’s youth are able to merge past and present media, hundreds of devoted female teenagers queued patiently to have their copies of Succede (‘It Happens’) by Sofia Viscardi, an Italian teenage blogger and YouTube star, signed by the author.